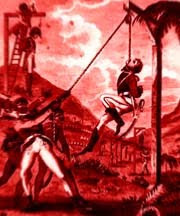 We often see the inexplicable behaviour of dolphins or whales committing mass suicide by beaching themselves. Scientists theorise and look for explanations, but overlook the most obvious, logical explanation.

They do it because a few of the pod head for the beach and the rest just follow. Just like we see in humans who follow what they perceive to be the “leaders” and never hesitate to follow these leaders over the cliff of racial extinction without a pause.

This phenomenon is called group thinking, and we do not even realise that we do this, that it is part of our human nature to try and fit in. Not to be kicked out of the herd, this is written in our genes, it was a necessary part of our survival in ancient times. If you were ostracized by the herd it meant your certain death by falling prey to wild animals or some other misfortune. Strength was in numbers.

The earthquake in Haiti is everywhere, the papers, television, magazines, all demanding a pound of flesh. Come on white man, cough up your money, you are white, they black so of course you have to take up your burden again by feeding, watering and giving your blood to the hostile hateful black masses.

And they do. TV commentators on the screens are urgently telling us that aid is coming too late, people are angry, and you have to do something. It’s your duty. If you want to be part of the herd, take up your burden. Accept your collective guilt for being white. You are better off than they are. Therefore it follows that somehow you must have taken it from THEM. Why else would it be your duty to look after them.

Like throwing a bone to a savage dog, and we are still doing it, we members of the white race. In places like Kenya, women lay dead, legs spread, raped to death. Babies heads bashed in on the rocks, Angola, Mozambique, Belgian Congo. Missionaries, colonialists, good men, bad men.. all they have in common is that they are white.

Now it’s the turn of South-Africa.

Come on white man in Europe and America, throw us another bone. Tear off pieces of your white body and feed our need for your blood.

Then maybe, when we get to YOU, our bloodlust will be appeased.

White people avert their eyes, and throw their own white brothers and sisters on the altar, neatly tied up as a sacrifice. After all they lived practised separatism from the blacks. So these white murderers of their own kind soothe their consciences. They oppressed the poor blacks, this has to be our TRUTH. Else how will we look in the mirror?

They are relieved that the media avoid telling them too much about the uncomfortable truth. That they do not have to hear that the dead whites number in the thousands and thousands. That their blood is enough to swim in by now, that the gutters of Africa run red with the blood of other civilised white men and women. That old white women die because they open the door to feed a black man and give him water.

That, just like in Haiti, and Kenya, and Mozambique the last whites who were born in this godforsaken continent are being massacred, raped, starved, and exterminated.

Maybe some nights they lie awake and their eyes stray to the cradle of their baby. And for a fleeting second they wonder... what if? What if “they” kill my child one day, displace him in his homeland. But then they soothe themselves, no it can never happen. I am a good Christian. I pay taxes, work, and I am nice to black and brown people. They won’t kill me or my child. I will be spared because I am better than the evil white people who were colonialists. THEY deserved to die, I don’t, I vote for the right politicians. The ones who give us more abortion, so we can even kill our babies when they are old enough to have survived on their own.

These politicians make sure that our secularity is not contaminated by God. And they make sure that we do our “duty” and take in more black and brown refugees. After all, we love diversity.

If we just make more concessions, just try to be invisible, try hard enough to suppress our culture and adopt theirs instead. If we try hard enough to ignore that our white pensioners are freezing to death because the money isn’t enough anymore to provide for them, and for our new black slave owners, whom we must serve, because we are white and they are black. And our leaders say this is how it must be. We are doing it for our survival. If we just keep feeding them some more of our own, appease them, they will love us. Surely?

Sybille,I mostly agree with what you wrote.But I think you might be a little harsh concerning Haiti in the current earth quake.This is not something they brought on themselves although all the other things about their past hold water.