Feb 1 2010 - The Dutch liberal daily Trouw – which was launched as an underground newspaper fighting against the WWII Nazi occupation of The Netherlands – wrote an amazing article today. Its journalist Gineke Mons actually reported the fact that ‘hundreds of young black males torture to death about 100 white farmers a year in South Africa.’

Their article, headlined “Afrikaner Boers left in the lurch’. describes that two farmers a week are murdered on average and that the Agri-SA farmers’ lobby has rung the alarm-bell, warning that the rural security plan – ( launched in 1999) -- doesn’t work.’

The Gineke Mons article in Trouw describes the trial in Senekal of Petrus Ndaba, 29 and comrade Pule Jacob Mpanyane, 22, suspected of last year’s murders of the elderly farm couple Koos and Retha van Zyl – shot dead with their own shotgun after he had tortured the couple on a meat-hook on January 5 2009.

(My background:) Van Zyl (63) and his wife Retha (66), a much loved local teacher who had just retired, were ‘slaughtered like animals’ on their farm Poortjie in the Free State. Both were first attacked and cruelly mutilated with a meathook, and then shot dead with their own shotgun, said police. Netcare 911 spokesman Chris Botha described the scene at the time as “absolute carnage’ after paramedics arrived. It was the second farm attack in the Odendaalsrust district that week.

Ndaba was arrested while fleeing in their daughter Marietjie’s red Chevrolet Avea sedan with a stolen sheep. Sergeant Majang Mosupa of the Free State police said Mrs Van Zyl had apparently gone outside to turn on the electricity generator when she was attacked. It is suspected that the attacker, a former labourer who was fired for stealing from the couple only a day earlier, had apparently turned off the generator off to her outside. Mr Van Zyl, who was frail and very ill, was then attacked in the kitchen with a meathook which slashed open his neck and head, said Mosupa, while Mrs Van Zyl, who had also been attacked several times with the meathook, then was tied up and dragged through the homestead. The couple then both were shot in their chests with a shotgun. 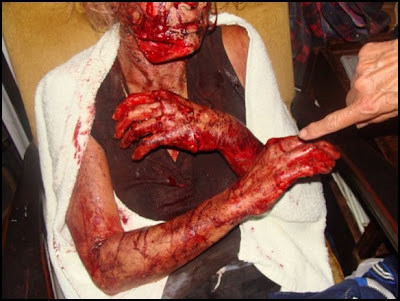 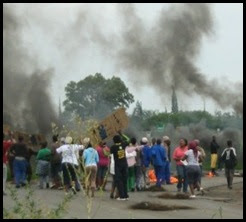 Pictures: on the same day of the trial of Van Zyl couple’s murderers, a violent demonstration also took place in the Viljoenskroon area against the ANC regime’s so-named ‘poor service delívery,’ and an Afrikaner farm-wife called Theresa, picture far left, was cruelly attacked, tortured with a panga and raped. It’s amazing that she survived the ordeal.

Trouw writes: “White farm families and smallholders on the South African ‘platteland’ have been terrorised for years by violent attacks. Farmers union AgriSA, which represents about 90 percent of the 45,000 (?) commercial white farmers, estimates an average of 750 to 800 farm attacks a year during which about 100 people are murdered.

“Some Afrikaner groups refer to this as a ‘white genocide’ but Agri-SA does not want to go that far, claiming instead that farmers and smallholders are ‘soft targets,’ writes Trouw, quoting André Botha, who heads the organisation’s security department, as repeating the same old ANC-saw, namely that: “Farmers live in remote areas and usually have guns, money and cars. Attackers know that it takes a long time on these rural farms before police arrives after an emergency call.’

Trouw quotes the University of Pretoria’s 2008 investigation of 37 convicted farm-murderers, noting that on average, each one of them had carried out an average of 105 violent crimes before they were even caught. And police statistics overall show that from all the reported crimes, only 12 percent ever end up in a conviction.

Trouw quotes Unisa-criminologist Dawie Swart, who says the detective investigations by the SAPS are ‘pathetic. Ever since the takeover by the ANC-government, inexperienced, untrained black people have been appointed in police post and a great deal of expertise, knowledge was lost in this process’.

Trouw also reports about the pre-1994 commando system, when the SAPS worked with local defence-force volunteers who knew the area well. However when the ANC gained hegemony, the commandos cooperation with the SAPS were ended.

“To fill the vacuum, Agri-SA developed an alternative rural security system with the government,’ Trouw reports. “The rural areas were split into sector-policing areas and the police was supposed to be assisted by patrolling police-reservists in each sector. These police-reservists were civilians, often farmers, and were given brief military training and given similar (arrest) authority to the SAPS.”

Botha says the sector-policing plan for rural areas, which was launched in1999, does not function well in many places. “There are too many police officers not doing their jobs, and who are never corrected for not doing their work. The rotten apples don’t get fired. This infects the entire policing system. Agri-SA has been trying to raise this issue with the Police Minister for the past two years but we get no reactions,’ said Botha.

“Farmers and smallholdings feel marginalised because there is no attention for their unsafe situation. And this while the commercial farmers keep the rural areas afloat financially. If they disappear, development in our rural areas will collapse. The commercial farmer is the key to a South Africa with a future, or a country which will glide into a country like Zimbabwe,’ warns Botha.

Trouw ‘s article ends with a quote from a black farmer and neighbour of the murdered Senekal couple, April Modibedi. "We worked together for a long time. He was a good man. Whenever I had lost a sheep, he helped me in the search to find it back again."

Our picture albums of murdered, attacked and traumatised Afrikaners and Boers