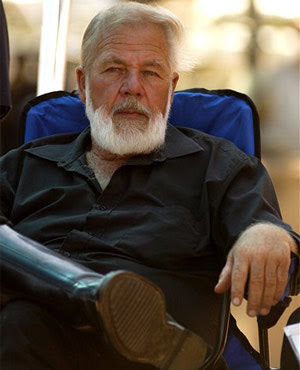 Cape Town - The AWB is "trying its best to keep people calm" after the murder of the far-right wing group's leader, Eugene Terre'Blanche on Saturday.

Terre'Blanche was beaten to death on his farm Villanna in Ventersdorp in the North West early on Saturday evening. A panga and knobkerrie were found next to Terre'Blanche.

Two of his farmworkers, a 16-year-old and 21-year-old, were arrested for the murder.

The two allegedly got into an argument with Terre'Blanche over wages, said police spokesperson Adéle Myburgh.

The group's André Visagie said the AWB's immediate plans are to make funeral arrangements. Thereafter it will have a meeting about "how to avenge" Terre'Blanche's killing.

Meanwhile, AfriForum and Solidarity have called for calm in the wake of the AWB leader's murder.

AfriForum's Willie Spies said it was essential that all South African - white and black - refrain from reckless statements and, what he called, the "romanticising" of violence.

He said the killing of the AWB leader was proof of how volatile the situation in the country was at present.

Spies urged South Africans to remain calm in circumstances which could have potentially destructive repercussions.

In the previous week, the South Gauteng High Court also banned the song. The ANC plans to go to the Constitutional Court over the ruling.

Solidarity said on Saturday night that Terre'Blanche's murder was proof that no-one in South Africa was safe.

Buys said it was time President Jacob Zuma put an end to the controversy surrounding the issue as it was leading to extreme polarisation which the country could ill afford.

Meanwhile, Zuma's spokesperson Vusi Mona said the president was filled with shock and horror at the killing.

DA leader Helen Zille described the AWB leader's murder as an absolute tragedy and said violence was not a solution.