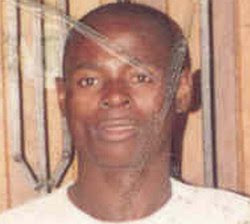 April 28 2010 at 07:10AM
By Baldwin Ndaba, Nontobeko Mtshali, Shain Germaner and Angelique Serrao

Police guarding the Lebombo border post to Mozambique are not aware of the search for a Mozambican who is the main suspect in the assault on a one-year-old baby and her minder in Randburg - even though the neighbours of fugitive Chakhoma Machaba say he has not been at home for days.

They say they believe Machaba, a Mozambican who was reportedly living legally in South Africa, has fled to Maputo.

Yesterday, officers at South Africa's main border post with Mozambique confirmed to The Star that they did not have a circular notifying them about Machaba, nor did they have a warrant for his arrest.

Home Affairs spokesman Ronnie Mamoepa said the department would have to be informed by the police about warrant-of-arrest details before they could act. But Gauteng police spokesman Lieutenant Colonel Eugene Opperman did not want to disclose whether Home Affairs had been made aware of the search.

"It is information that would only be known by us. We do not want to inform him (Machaba) about our plans to arrest him. We want to arrest him," Opperman emphasised.

On Saturday police arrested Gerald Nyatumbo, 28, in connection with the Randburg attack and later, acting on information, went searching for Machaba at his home. There they found his cousin, Nelson Maphosa, 25, who was also arrested.

Nyatumbo and Maphosa were due to appear again in the Johannesburg Magistrate's Court today to face charges of robbery with aggravating circumstances and two counts of attempted murder.

Police, however, believe Machaba is their main suspect and have issued an appeal for information on the whereabouts of the 28-year-old.

Machaba, who lives in the corner of a large cluster of shacks in Alexandra, has apparently not been seen at his home for days.

The shack, down a narrow alley next to a spaza shop on 17th Avenue in Alexandra, was identifiable only by a licence plate number hanging on the door.

Etched on the side of the metal shack is the word "builder".

According to neighbours, Machaba shared this tiny, blue-door shack with three other men - one of whom was arrested at the weekend.

A friend, who did not wish to be named, confirmed that Machaba was out of work, and said he was generally a friendly guy who never drank, and was rarely seen at shebeens and taverns.

Earlier reports indicated that he had a propensity for violence.

And the bloody chaos that met Madelein Kruger when she returned home from work on Thursday bore testimony to that: her one-year-old daughter Marzaan was bleeding from the ears and nose and her nanny, Franscina Sekhu, had been assaulted too.

Sekhu told The Star from her hospital bed that she had let in the attacker because she considered him to be a friend, and knew him from his work as a builder at the Krugers' house.

Yesterday, Marzaan's family gathered outside the paediatric ICU at the Sandton Medi-Clinic. They refused to speak to the media, but hospital spokeswoman Liezl Furlong said the baby was still in a serious but stable condition.

This article was originally published on page 1 of The Star on April 28, 2010