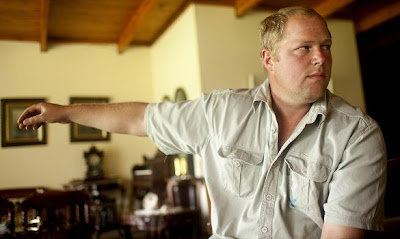 The gunman leant forward and pushed the pistol hard into Manie Potgieter’s neck. “Listen, you white bastard,” he whispered, his breath heavy with alcohol. “I have Aids. We are now going to rape your wife and give her Aids too. Then, we kill you, got it?”

From his position on the floor, hands tied behind his back, he could hear his assailant’s three accomplices pulling the tracksuit bottoms off his wife, Helena, 28.

“I was sure they were going to shoot me, but I just prayed she would be OK. She was telling me in Afrikaans not to worry. I just prayed,” Mr Potgieter, 30, a blond giant of a man, told The Times.

Suddenly, a clang of metal echoed through the early morning air — and the attackers took fright. They had been in the remote farmhouse for an hour and dawn was fast approaching. “Let’s go, someone is coming,” one of them shouted in panic. Without firing a shot they were suddenly gone.

The Potgieters’ nightmare was over — but it was one of the very few happy endings to a spate of attacks on South Africa’s white Afrikaner farming communities in which an estimated 3,000 people have been killed since 1994.

On another farm, a few miles away, Louis Boshoff, 65, and his wife, Elsabe, 57, were not so lucky. A few months ago, Mr Boshoff arose early one morning, as he has done for almost 47 years, to milk his small dairy herd.

“Two men were hiding in one of the outdoor sheds. They had balaclavas on and came at me. One had a gun and the other a catapult with ball bearings as shot,” he said.

When one of them fired at his barking dogs, Mr Boshoff saw red and tried to rush them, but he was shot twice. He lost his spleen, most of his pancreas and half his liver. His wife rushed to be at his side, tripped and suffered a broken leg.

The subject of attacks on white farmers is deeply disliked by the ruling African National Congress for the unflattering comparisons that it brings with neighbouring Zimbabwe, but it has come to the fore since the murder of the white supremacist leader Eugène Terre’Blanche a month ago. That incident followed a sharp deterioration in race relations after Julius Malema, the outspoken leader of the ANC’s Youth League, started singing at rallies an old anti-apartheid struggle song that includes the words “shoot the boer [farmer]”.

The High Court banned the song but the ruling is now under appeal. Mr Malema faces an ANC disciplinary hearing after he defied orders and continued to sing the song while visiting Zimbabwe, where he praised President Mugabe for land reform policies, under which 4,000 white commercial farmers have been driven off the land in the past decade.

Since Terre’Blanche’s murder the farm attacks have continued unabated. Last week another two white farmers were killed in separate attacks.

“The murder of TB [Terre’Blanche] was planned. They start singing ‘kill the boer’ — then the most famous boer of the lot is murdered. I did not support him, but do not tell me it is not linked,” said Ian Bothma, 47, a tradesman from Terre’Blanche’s home town who has recently applied to emigrate to Australia. “We are now in the final days of white life in this country.”

The Government points out that blacks are also the targets of farm attacks; black unions, for their part, emphasise that, 16 years after the end of apartheid, many black farm workers are still ill treated, with their white employers accused of fuelling the violence by paying derisory wages and using illegal migrant labour.

At the root of the problem is the Government’s failure to carry out land reforms that meet black aspirations without destroying the productive agricultural sector. It wants at least one third of productive farm land to be in black hands by 2014 but is way off target. The land bank set up to finance farm purchases is broke; fleeced by its own managers, with a corruption investigation under way.

Andre Botha, chairman of Agriculture South Africa’s rural safety committee, told parliament recently that the biggest challenge facing the industry was “irresponsible remarks” by officials and politicians. “If we are excluded from being South African then there is a big question mark put on democracy,” he said.

Last week, President Zuma promised that there would be no Zimbabwean-style land grabs — but most whites are not convinced. “I was born and bred here but it is time to go,” Mr Bothma said. “It is unfair to inflict such a future on our children.”

3,000 farmers murdered since the end of apartheid

200,000 hectares of abandoned farmland has been leased by the Government of the Democratic Republic of Congo to farmers fleeing South Africa

30% of land must be in black hands by 2014, if government targets for land reform are to be met

2% of land has changed hands so far, with funds for further purchases having dried up and a corruption inquiry under way

20% of South Africans of all races want to emigrate, with 95 per cent of those naming violent crime as the single most important factor