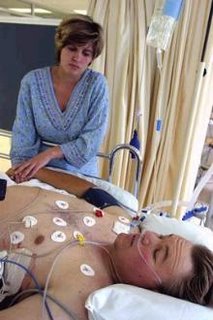 Johannesburg - A Heilbron woman's hopes that her husband would one day walk again were dashed on Monday when she was told his spinal cord had been severed.

Jaun van Rooyen, 31, and Anri, his two-year-old daughter, were both injured by the same bullet after a hijacker opened fire on them.

The bullet penetrated Van Rooyen's back and lungs before hitting Anri in the stomach.

The shooting happened on Saturday afternoon while Van Rooyen, his pregnant wife, Renet, 30, and their two children were on their way home to their farm.

Van Rooyen had stopped along the road to pick up farm workers when a stranger appeared at his window and opened fire.

Van Rooyen tried to drive on, but after only a few metres his lower body became paralysed.

The men fled on foot, and Renet phoned for help.

Van Rooyen was transferred from Vereeniging Medi-Clinic to Eugene Marais Hospital in Pretoria on Sunday night.

Anri is still being treated in intensive-care at Vereeniging Medi-Clinic.

The family had held on to the hope that Van Rooyen's spinal cord was not permanently damaged.

They had even considered bringing in a specialist from Germany to do a stem-cell implant.

But, on Monday afternoon, an emotional relative, Erica Carstens, said a magnetic resonance (MR) scan had been done on Van Rooyen and it was found there was nothing doctors could do.

"We had hoped so much they would give us good news. It's really a very emotional time for the family."

Meanwhile, the family has offered a R25 000 reward for any information leading to the arrest and conviction of the suspect.

Mother on trial for 'ritual killing' of baby

A Khayelitsha mother, her boyfriend and a self-described "trainee sangoma" will stand trial in the Cape High Court on Monday for the alleged "muti" murder of the woman's one-year-old daughter.

Little Phelisa Msengana, whom relatives said had just "begun to run", was hit with a blunt object and strangled, before her intestines were allegedly removed and fried in a pan to make muti for her mother's boyfriend, who was looking for a job.

Her badly decomposed body was found in a large area of open veld between Khayelitsha sections 54 and 56 in July last year.

It had been hidden by shrubs and long grass for several weeks.

He had later given her then-unemployed boyfriend, Bongani Mzizana, 36, muti mixed with intestine, as well as "instructions" on how to use it when asking for a job, she said.

Msengana revealed that her boyfriend had received work at the Cape Town harbour the day after the murder.

According to Msengana, the healer told her not to tell anyone what had happened to her baby, and said that she should stay indoors for two months.

She had been too scared of Duda to tell the police about what she had witnessed, she told the court.

Despite Duda's instructions that she stay inside, Msengana left home five days later, after a row with Mzizana.

Msengasna, Mzizana and Duda, who shared a home in Khayelitsha, were arrested by members of the community and handed over to the police some two months after the murder.

They all face a murder charge, as well as a charge of mutilating a body for cutting Phelisa's body open and removing her intestines.

The state, represented by advocate Greg Wolmarans, contends that Msengana, Mzizana and Duda were all responsible for Phelisa's death - either by directly taking her life or allowing her to be murdered.

Wolmarans is expected to call the police witness who secured the scene where Phelisa's body was found, as well as several of the little girl's relatives.

It is not yet known whether Phelisa's father will attend Monday's hearing before Mr Justice Deon van Zyl.

Heilbron - A farmer was paralysed by an attacker's bullet that also hit his three-year-old daughter in the stomach.

Juan van Rooyen, 32, his wife Renette and their two children, Anri and Janus, 4, were driving towards their farm on Saturday evening when Juan stopped at an intersection to speak to a farmworker.

Renette saw two men approach, one of whom pulled out a gun.

A shot was fired, hitting Van Rooyen in the back. The same bullet hit Anri in the stomach.

Van Rooyen tried to drive on, but after only a few metres his lower body became paralysed. The men fled on foot, and Renette called for help.

The bullet shattered vertebrae in Van Rooyen's back.

Fritz van Rooyen, Juan's brother, said they were in a serious but stable condition.

Captain Rosa Benade for police said the man Van Rooyen greeted was helping with the investigation. His father works for Van Rooyen.

Lephalale - The dentures of an elderly woman who was murdered on a Limpopo farm last year were forced so deep down her throat that a doctor struggled to extract them during the post-mortem.

This fact came to light on Wednesday during the hearing of two men, Jan Medupe, 23, and Oriel Monyebodi, 28, in connection with the murder of Rina du Plessis of Malbourne farm, Tom Burke, in December last year.

Du Plessis was overpowered and murdered by two men when she went out to feed her chickens.

Her husband, Doep, also was overpowered and money was demanded from him, but the attackers fled when he took out a gun. He was seriously injured during the attack.

The attackers finally fled with only R9 in small change.

Had to make cut in throat

Inspector Jurg van Heerden, investigating officer in the case, was testifying at the High Court in Lephalale (formerly Ellisras) on Wednesday before Judge Mahomed Ishmail.

The court was told that during the post-mortem, Dr Charles Kauene spotted an obstruction in Du Plessis's throat and tried to remove it.

Van Heerden, who was present at the post-mortem, said the obstruction was rammed so deep down her throat that the pathologist had to make an incision in her throat.

He then used an instrument to shove the object upwards to remove it through her mouth. Only after he removed it did he recognise it as dentures.

In a statement read in court on Wednesday, captain Herman Lubbe testified that Medupe recounted after his arrest how he put a cloth with an iron bar in Du Plessis's mouth when she started screaming after they overpowered her.

Waited for her husband

Lubbe also testified that Medupe said they tied her hands and feet and hid her behind a bale of lucerne in a shed.

According to evidence, they waited for her husband who was out in the field during the attack on his wife and assaulted him.