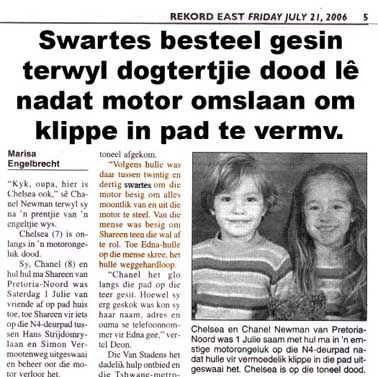 An article which appeared in the East Rand REKORD, Friday 21 July (Thanks to Michelle for sending it through). Translated from the Afrikaans:

“Look Grandfather, there is Chelsea as well.” Says Chanel Newman as she points to a picture of an angel.

Chelsea, (7) was recently killed in a car accident.

She, Chanel (8) and their mother Shareen were on their way home from friends on Saturday 1 July when Shareen swerved out for something laying on the N4 highway between the Hans Strijdom Drive and the Simon Vermooten offramp. She lost control of the vehicle and it overturned, landing in ditch alongside the road.

A second vehicle also had to swerve away from the objects in the road. When the occupants of the second vehicle spotted the first one laying overturned, they stopped to investigate.

According to Deon Nel, Shareen’s father-in-law, the two people in the second car, Edna and Koos van Staden, came upon a shocking sight.

“There were between 20 and 30 Blacks busy stripping the car of everything they could find. One of them was busy rolling Shareen down the embankment wall, When Edna shouted at them, they ran away.”

Chelsea was laying dead at the scene while all this was going on.Chanel was sitting on the tar. Although she was in shock, she could still give the van Stadens her name, address and grandmother’s telephone number.”

* It is a common tactic to put objects in the road and cause accidents, with the most prevalent site for such attacks currently being the Benoni off ramp on the Airport Highway between Pretoria and Kempton Park.