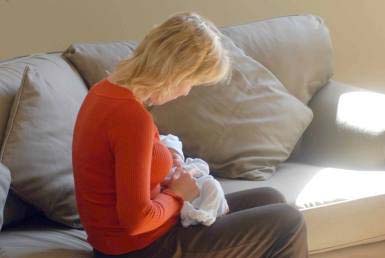 Happy ending: The woman who was attacked and raped in her Gordon's Bay home while she was pregnant has given birth to a baby boy. Photo: Ian Landsberg, Cape Argus
Murray Williams

Rape is every woman's worst nightmare, but for a 25-year-old Gordon's Bay woman it was worse: she was pregnant.

The violence that unfolded on the night of May 22 shocked greater Cape Town when details emerged the next day.

On that night, a gang of nine men from Khayelitsha travelled to Gordon's Bay. They smashed their way into a house and bludgeoned 78-year-old Joy van Aarde to death.

They then moved next door, where they surprised Clifford Bacon, his son and a friend. The trio were tied up.

One of the gang then forced Bacon's pregnant fiance into a bathroom.

She gave birth to her child four months later. Months of anxiety, panic and worry were finally over.

"No, it wasn't easy," she said on Thursday. "I took a lot of stress and strain.

"They had to checks every two weeks, because they were concerned that my stress was going to affect my baby.

"The doctors told me I can't let myself fall apart... The baby would suffer. I'd put my body into stress and my body would choose me over the baby. A lot of women can have still-born or premature babies."

It was a shock, a wake-up call.

"It was touch and go for the first month. I had to force myself not to freak out when I walked into a dark room. I would think that someone was hiding in the corner and that the alarm hadn't picked him up.

"Or if I walked into a shop and there was a guy who looked similar (to one of the gang of attackers) I started panicking.

"I still had these little scares in my mind. But somehow, somewhere, someone was watching over me.

"I knew I couldn't let it overwhelm me."

September 11 is a day remembered for its violence. But the day, this year, was one of joy and peace.

A natural birth had been planned, but his mother had contracted flu a week earlier so she had to have an emergency Caesarean.

"He was able to be born. I'm able to touch him, bath him.

"It's closure that I was able to see the pregnancy through.

"He only cries when he's hungry. He's such a placid little baby.

"I just thought he was too beautiful. I couldn't believe this little person was what we made. All mothers think that all newborns are beautiful, but I think mine is the exception.

"I still have fears. But because newborns can sense that something's wrong, I can't let myself succumb to them. It would lead to a whole chain of events."

The only outstanding closure of her ordeal is the trial of their attackers.

"I want to know what happens to them. I want closure.

"From there, it can only get better."

The men arrested in connection with the rape are awaiting trial in Pollsmoor Prison while laboratory tests are completed.

Two of the men - Simon Lolo, 20, and Thomas Baraza, 22 - unsuccessfully applied for bail. Both have criminal records.

Vuyisila Msaseni, 19, Siyabonga Zanzele, 22, were facing further charges, but were released by mistake in a court bungle.

The other men arrested are Lungile Mayo, 19, Siyathemba Tshanyela, 21, Thembile Ngxowe, 19, Mzamu Ncwana, 18, and Luganda Zaza, 19. A prosecutor has told the court that three of the nine were wanted for other murders.

I'm actually trying to think what to say but its really beyond words.
This is the handy work of satan's children carrying out his demonic whisperings.
White people must pull together or the end will be even worst than this.