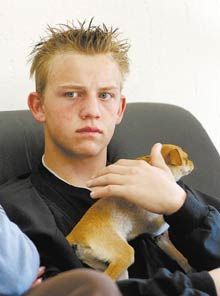 Lourens de Beer, 15, who was watching TV when four men broke in, "assassinated" his policeman father and then left without taking anything. (Alet Pretorius, Beeld)

Pretoria - Police inspector Louis de Beer was making supper for his son and himself when he was shot dead in cold blood in the family kitchen.

Then, the killers just walked away, leaving De Beer's 15-year-old son, Lourens, alone with the body of his father who had seen 31 years of service.

They left without taking a single item from the house on a smallholding at Renosterspruit near Lanseria Airport.

De Beer, of the police's vehicle theft unit in Diepkloof, Soweto, and Lourens were alone at home on Monday night when the men appeared out of nowhere in the house.

Dad was in the kitchen

Lourens said: "We saw four men on the dirt road when we drove home and my dad said I must watch out for those men. He also said one of them had a weapon.

"But, my dad always joked like that," said Lourens, a pupil at Florida High School near Johannesburg.

It is believed these were the four men who later attacked the house.

Lourens was watching television while his dad was busy in the kitchen.

De Beer's wife, Marie, a theatre sister, was on her way home when the shooting took place just before 20:00.

Lourens said: "The four came storming in. They were all armed. They shot my dad and said I must lie on the carpet.

"One indicated with his hand in front of his mouth that I must keep quiet. When I was sure they'd all gone, I went to the domestic worker.

"She came back home with me and took me to the neighbours where we phoned the police," he said.

Inspector Katlego Mogale said De Beer had been shot at close range in his temple. The attackers presumably fled on foot and are still on the loose.

He said it was too early to say whether the attack was related to De Beer's work as a police officer.

Nothing was missing from the house and De Beer's wallet was still on him.

Father, son had been inseperable

Marie de Beer said: "My husband said the other day one wasn't safe anywhere any more.

"He said if we really knew what went on outside, we wouldn't stick our noses out of the door.

"The government must begin doing something. Now, there is a 15-year-old boy without a dad.

"They did absolutely everything together."