'Dying screams will haunt me' 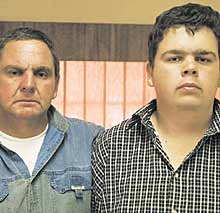 Pretoria - Pieter Muller says his wife's screams, shortly before she was shot dead by hijackers on a busy highway, will live with him forever.

Muller, a 43-year-old Ermelo engineer in Mpumalanga, described his wife's last moments: "She screamed like I've never heard her before and, at the same time, I heard a shot."

The body of his wife, Maryna, 38, was found in their abandoned Toyota Prado.

The Mullers stopped next to the Danie Joubert highway in Lynnwood, near King's Highway, about 20:30 on Wednesday, for Pieter to urinate.

He said: "We had had dinner in Pretoria and had a wonderful time.

"We were on our way to a guest house where we had a business appointment on Thursday."

Pieter said on Thursday he had been standing about 3m from the vehicle when he heard his wife scream.

"I spun around and heard a shot.

The lights of another car, which stood behind my vehicle, nearly blinded me, but I could see a man running past.

"The attackers fired another shot. I started running away because I thought they were shooting at me."

Pieter hid about 30m further on, behind a tree.

"I saw both vehicles - mine and the attackers' vehicle - driving slowly towards me, as if they were looking for me.

"But, just as suddenly as they had appeared behind my car, they drove off at high speed with my wife in our car."

Pieter tried in vain to get help from other motorists.

He eventually managed to stop a motorist after climbing an embankment about 500m further and standing in the middle of the road.

A man stopped and contacted the police.

The Prado was found abandoned in Cliffondale Street in Faerie Glen to the east of Pretoria.

"There were numerous police officials standing around. I saw my wife's body in the car.

"Her seat had been lowered and she was lying flat, but didn't react when I called her. I realised she was dead."

She had been shot in the stomach, chest and leg. She was still wearing her seat belt.

"She would have fought her attackers. She was a perfectionist and my right hand.

Nothing stolen from car

"Maryna and I built our business from scratch and we've just started enjoying it - but, now she's gone."

"When I arrived back home, I had to wake my 17-year-old son to tell him his mother was dead."

Pieter and Maryna had been married for almost 20 years.

Nothing had been stolen from their vehicle.