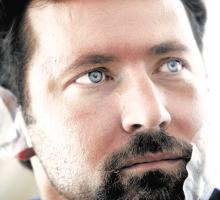 A Pretoria father, shot in the face and stabbed several times in the back and neck, repeatedly fought off two thugs trying to rape his 12-year-old daughter and murder his six-year-old son.

Describing the horror attack, which lasted 30 minutes, Chris Herbst said on Wednesday that he was asleep in bed with his pregnant wife during the early hours of Monday when his family were attacked in their Elardus Park home.

The men escaped with two cellphones and a purse, after breaking into the family's Piering Street home.

Herbst's wife Juleen was woken when she heard the thugs talking outside the bedroom. Seeing torches, she screamed and rolled off the bed and into a corner as her husband charged into them, knocking one of the robbers to the floor as the other opened fire, shooting him through the jaw.

Bleeding profusely, Herbst managed to chase the men out of the bedroom and down the passage.

Herbst ran to his screaming daughter, Annika, and son, JJ, in an attempt to comfort them. As he ran into the room the attackers returned, yelling that they were going to murder and rape them.

Herbst, hiding behind his children's bedroom door, charged into one of the men as he came into the bedroom before racing for the alarm panic button in the passage.

Screaming in pain as the man stabbed him five times in the back and neck, Herbst yelled at Annika to jump through the bedroom window and run for help before running to his son, whom he pushed under a bed.

Herbst said he had been terrified. "All I knew was that I had to protect my family," he said.

'If it weren't for Chris we would be dead'

He said when he was shot he thought he was going to die.

"All I could think about was chasing the men out of my house to protect my family. I was screaming like a mad thing and just ran repeatedly at the thugs, thinking that I had to get them out even if it meant I was killed," he said.

Herbst said that as he ran into his children's bedroom he heard the men screaming as one ran to his bedroom, where his wife was hiding behind the door, and the other towards his children.

"As the man ran into the room I jumped at him before running to the alarm. The man grabbed me and started stabbing me. I remember feeling a searing pain in my back and neck as the man hacked at me.

"I managed to punch him to the ground and push my way into my children's bedroom, screaming at my daughter to break her bedroom window and run," he said.

The robbers heard the window smash as Annika ran to neighbours and fled, leaving Herbst on the floor.

A shaken Juleen Herbst, who was due to give birth last Friday, said she had been terrified. "If it weren't for Chris we would be dead."

Police Inspector Anton Breedt said they were searching for the men. Anyone with information on the attackers' identities or whereabouts can contact Lyttelton police station on 012 644 8267.


This article was originally published on page 3 of Pretoria News on October 26, 2006

We need more of these dudes!