'They picked me up by the ears' 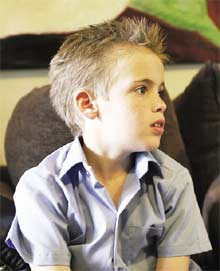 Zaan Sonnekus (8) describes how he was tied up by three armed robbers. (Alet Pretorius, Beeld)

Pretoria - "They picked me up by the ears, kicked me in the legs and hit me once in the face.

"They then aimed a gun at me, but I was not afraid and did not cry. I kept hoping that my sister wouldn't arrive home, because they might hurt her."

These were the words of Zaan Sonnekus, 8, from Elardus Park, Pretoria, who, along with his brother, Duvall, 5 months, and two domestic workers, Maria Seshabela and Jannet Mphalela, and Seshabela's daughter, Kenzani, 2, were overpowered, assaulted and robbed by three robbers armed with firearms and a knife on Monday afternoon.

Zaan, a Grade 2 pupil at Elardus Park Primary School, won a debating competition at his school a couple of hours later.

He said he kept wondering how the robbers had gained access to the house.

Duvall and Kenzani were sleeping when the robbery took place. Zaan had just arrived home from school.

"I was sitting on the toilet when I heard somebody enter. I thought it was Maria, but then they walked in.

"They picked me up by the ears and took me to my mother's room. They threw me against the pillows and let me drop onto the floor. I was not wearing my pants, because when I asked them if I could put them on, they swore at me."

According to Zaan the robbers wanted to know where the safe was, but he didn't know. "They tied up my mouth, hands and legs and locked me in my sister's bathroom."

The robbers also tied up Seshabela and Mphalela and kicked and beat them.

Zaan later managed to untie his hands and climbed through the bathroom window. He climbed back into the house through his mother's bedroom window, but the robbery was over by then.

His sister, Zia, 13, arrived home shortly after the robbers had fled. She saw them getting into a taxi and driving away.

"I saw Maria's shoes outside and thought it strange. When I entered the house I found her trying to call my father. She was still gagged and her hands were tied. Jannet was lying in one of the other rooms," she said.

Zia ran into the street and asked security guards who happened to drive by for help.

Zaan's mother, Trudie, said the robbers took jewellery, cameras, a DVD player, her wedding ring and other valuables. She and her husband were in town when the robbery took place.

"One does not realise how bad crime is until you become a victim," she said.

The family was receiving counselling, she added.