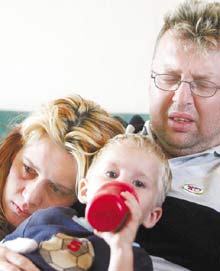 Johannesburg - "I will never see my little curly tops again."

A distraught Diederick Esterhuizen, 36, couldn't fight back the tears as he recalled how a gang of robbers had murdered his five-year-old daughter, Danielle, on Wednesday evening.

One of the men opened fire on the Esterhuizen family during an outing to Riebeeck Lake about 2km from their Randfontein home.

A bullet struck Danielle in the forehead as she lay in her mother Anel's arms.

"I heard my child scream and there was blood everywhere.

"I grabbed her and drove as fast as I could to the Robinson hospital," said Diederick.

His vehicles's tyres had been shot out by the robbers.

"I just kept praying that it was a slight scrape and that a doctor would be able to fix it," a crying Esterhuizen said.

But little Danielle was declared dead on arrival at the hospital.

A family friend, Ferdi Kleinhans, 29, was hit in the chest and groin during the attack and had to undergo emergency surgery.

His condition is serious, but stable.

Esterhuizen, tears flowing freely, told that he'd initially told Danielle and her brother Andrico, 3, that they couldn't go along when he and Kleinhans decided to go fishing.

He was concerned about their safety.

But the kids nagged Anel, 32, and she eventually gave in and took them to the lake.

When they arrived, the Esterhuizens and Kleinhans saw a suspicious-looking car.

They started worrying when the car's lights were switched off before the vehicle drove away.

Andrico was sitting on top of his dad's four-wheel drive while Esterhuizen took photos of him with his cellphone.

Anel was sitting on a chair near the vehicle and Danielle snuggled in under her jacket because she was cold.

They heard glass break and saw four men walk past.

One suddenly swung round, pointed a firearm at them and shouted "robbery".

Before the Esterhuizens could move, a volley of shots was fired at them, fatally wounding Danielle.

"No other child will ever be able to take her place. She was a loving angel," Esterhuizen said.

Police on Thursday combed the area for clues, but did not come up with anything.

"This is a horrible Christmas gift, was how Danielle's uncle, Gert Esterhuizen, 43, described the senseless killing of the little girl.