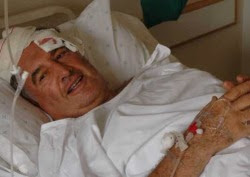 A Pretoria man miraculously escaped death when he was shot at point-blank range in the head during a house robbery in the early hours of Friday morning.

The 9mm bullet lodged in his skull millimetres from his brain.

The close shave occurred when Groenkloof resident Larry Shulman, 63, surprised two men in the lounge of his home.

Shulman was walking around his Herbert Baker Street home after being woken by the house alarm when he was shot.

'I could not believe that I was not dead'

The attack, according to Shulman's rabbi Gidon Fox, is the second violent house robbery in the street in the past week.

Speaking from his hospital bed shortly before a four-and-a-half hour operation to remove the bullet lodged in his skull, Shulman said everything had happened very quickly.

"I was walking through the kitchen holding my walking stick when I noticed that the door leading into the lounge was open.

"As I put my head around the corner I saw two men standing metres away from me in the lounge."

Swinging his walking stick at the men, Shulman hit one of them over the head before he was overpowered and beaten to the ground.

Lying on the floor Shulman remembers a man leaning over him and a bright flash as the man fired his gun.

"I was in shock. I could not believe that I was not dead. Everything seemed to happen at once. I remember screaming for help and my wife running to me.

"I could feel blood all over me and thought I was dying," he said.

Neighbours who heard the gunshots immediately rallied around the injured Shulman as police raced to the scene.

A search of the neighbouring Klapperkop reserve where the robbers had fled led to nothing. Shulman said the robbers had forced their way into his home after breaking the burglar bars in the scullery.

"At this stage we are not sure if they took anything. It looks as though I surprised them before they could grab any of our valuables."

His shaken wife Ashney said she was grateful that her husband was alive. "It is a sheer miracle. God was looking out for him. I do not know what I would have done if he had died," she said.

Rabbi Fox said the attack and other attacks in Pretoria were mortifying. "According to our government, crime is not severe, but attacks like this are of great concern. What is even more worrying though is the government's apathy, which is even more frightening than the crime itself.

"This is very scary. In any other society the national police commissioner would be fired because of his apathy about the crime rate."