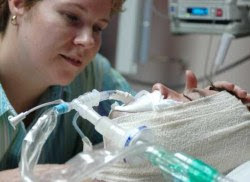 Harrowing times: Frans Furstenburg, seen with his wife Theana, fights for his life after being shot in the face while trying to fight off three armed men.
Photo: Liza van Deventer, Pretoria News

Frans Furstenburg, 38, was shot in the face on Wednesday night while trying to fight off three men armed with crowbars and a handgun.

The men, who fled from his Waverley home with nothing after hearing police sirens, attacked the family as Furstenburg walked inside his house.

He had just said good night to his insurance broker and was about to close the front door when two of the men grabbed him from behind, beating him over the head with crowbars.

'I do not know where I got my strength from'

Crying out a warning, Furstenburg dragged himself into his house while trying to fight off his two attackers.

His wife Theana, who was washing dishes, ran to his rescue and screamed at her daughter Thealize to hide.

Grabbing her cellphone, Thealize phoned the police, begging for help as she listened to her parents screaming in terror while fighting off their attackers.

A visibly shaken Theana, speaking from her husband's bedside in Eugene Marais Hospital, said she had been terrified. "I did not know what was happening. One minute I was washing dishes and the next I heard my husband screaming and shouting.

"As I ran into the passage I saw blood pouring from a gash on his head while he was trying to push the front door closed," she said.

Theana yelled at Thealize to hide as she tried also to push the door shut, trapping one of the attackers' hands in between the door and the wall. "I remember seeing the man pushing the gun into Frans's stomach and I prayed to God that he wouldn't shoot.

"I do not know where I got my strength from but I kept on shoving at the door and hitting the gunman's hand trying to force him to drop the gun," Theana said.

As she lashed out at the gunman's hand the attacker fired. The bullet struck Furstenburg in the jaw then ricocheted off and pierced his cheek.

Hearing the gunshot, Thealize phoned police, pleading for help and telling them to turn on their sirens as her father was dying.

Thealize's aunt, Zelda Britz, said her niece told her later that she had begged police to sound their sirens because she was scared her father was dying.

"She apparently told them to turn on their sirens and come quickly. If it had not been for those words I think they might all have been dead," she said.

Agreeing, Theana said she shuddered to think what would have happened if her daughter had not called the police for help.

Hospital spokesperson Amber Brown said Furstenburg was recovering in the intensive care unit where he was being kept sedated.

"He is in a stable condition and will undergo an operation to repair the damage the bullet caused to his jaw," she said. Parts of Furstenburg's jaw were shattered by the bullet.

He said that a case of attempted murder was being investigated

No arrests have been made.

This article was originally published on page 1 of Pretoria News on March 16, 2007


FROM THE DEMOCRATIC AZANIAN

The following advertisement appeared in the daily newspaper,

Franchise Opportunity of the Millennium!!

HEIST 'N HIJACK transformation business. Your starter kit would include the

PLUS FREE: 1 x pistol or revolver of your own choice! Extra ammunition.

PLUS! PLUS! Franchises available in all major townships!

We guarantee excellent returns on your investment!

Hurry, hurry, while stocks and franchises last! Don't be shy - you, too,

could have an instant transformation from Boy to Boss

at the flick of your trigger finger!

DO NOT DELAY! Phone 10111 and ask for Sergeant Tshabalabuza for immediate,

efficient service, in any official language, including Nigerian,

Mozambican, Zairian and Shona. Remember, this is a FREE call!

insurance and we are backed by the New SA Legal Aid Board.

Re: i reply to your franshise

I have no money. Ther was very much big dog by the house wher I broke de window, so I ran away very hard and I cud not steel de money to pay for your franchise. I beg you, pleese lend me money.

I beg you sir, I musta also hev de freedom of de city. Which city you hev for me? I also demand de check so can start my biesness strait away.

Tell me, who pay to bring de ak47? I ask sir, I wanna menni bullets and de nob kierie. And I not laaik de BMW, so you give me mercides without de nummer plates. My friend, he wil help me steel de nummer plates.

I ask you sir, I also demand de sekreteri with de big beksaaid and the thiek lips, but the sekreteri must not be too clever.

How much insoorance you pay? It is verri much better you give me the insoorance now. I need new soot and shoos for my new franschise.

Pleese sir, I do not want the medicle. It is better you sent me de docter and two poliesman, one black, one whaait.

I live by the railway line and de postman he not go ther so better you bring me all the franschise. Befor you bring de mercides it is better you make the petrol full. I will also be verri much happy if you put de polies radio in the boot.

You verri kind sir. I can even for you make shoor you get the seet by Winnie in de parlement. I got the frends. Better you use black shoos, Winnie not laaik iwhite tekkies.

My frend he write this letter for me, but he not know how to spell my name corektly, so sir, you find my name between de laains.

I wait for you.

Wonder if anyone will see this. The story that was publised as seen here Brave girl saves parents... Absolute BULLSHIT!!!! This reporter had his facts wrong... no sensationalized it. If it hadn't been for Theana Furstenburg (my sister) he would have died forsure. She infact was the one who saved him. If she handn't moved in behind the front door, tried to push it shut and hit that robbers hand they all would have been dead. And as for Thealize hiding under a blanket... Heloo it was summer dufus. She was standing in the tv room and just called the police saying someone was trying to hurt them. Thats all. No sound the sirens bull. They also left out some info like: Chubb Security never pitced up after all the panic buttons where pushed. After numerous calls to them they pitced up 30 min after the police. There was a bag with tools found in their garden that thiefs use to break in with. The one police guy that pitched up (think it was the main guy) just came back from a bar or something. Alcohol was smelled on his breath and he looked like he crawled out of a rubbish dump. How do i know all this?? Im Theana's sister Zelda Britz and i pitched up after she phoned me 40 min after the incident.
Beeld how ever published the facts that Saturday so thank you Beeld for publishing the truth.