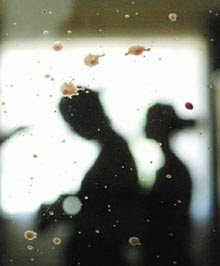 A bloodied mirror bears witness to the gruesome murder of Fanus Badenhorst, who was killed on his Jacobsdal farm. (Emile Hendricks, Volksblad)

Jacobsdal - A young farmer was shot dead at his Free State home on Saturday night, and his partner was tortured by four robbers to reveal the whereabouts of the safe key.

Police spokesperson inspector Loraine Kalp said four men were arrested within 12 hours of the attack in which Fanus Badenhorst, 27, died and his fiancée, Marina Maritz, 33, was beaten and scalded with hot water.

One of the men who shot Badenhorst was a suspected rapist and later committed suicide.

According to inspector Isaac Ntoyi, the town's chief detective, Leon Mahlaba was out on bail while awaiting trial for rape.

He drank poison shortly before being arrested at home on Sunday morning and died later in a Kimberley hospital.

Three other men, all in their early twenties, were arrested on Sunday afternoon, Kalp said.

Badenhorst and Maritz were attacked by the four men late on Saturday night.

A friend, Lourens de Lange, told Volksblad they were all together at his restaurant (Die Vat) in town earlier in the evening.

When they arrived home, they went to bed, but woke up when their three-month-old baby Anzelle started crying.

Maritz went to attend to the child, and when Badenhorst saw the four attackers in the house, he shouted to her to lock herself and Anzelle in the bedroom, he said.

Badenhorst was shot in the chest with a pistol during the struggle, and collapsed in the living room.

The attackers then kicked the bedroom door open, tied Maritz up, and tortured her.

To force her to reveal where the key to the safe was, boiling water was thrown over her body and she was repeatedly beaten with a broomstick, De Lange said.

"She begged them to leave her child alone. Luckily Anzelle is alright."

Shortly afterwards, the Jacobsdal police arrived at the scene and fired shots at the fleeing men, said Kalp.

Parents got to say farewell

Badenhorst's parents, Faan and Sally, arrived just in time for him to say farewell to them.

They had recently moved into a townhouse that Badenhorst junior had bought for them because he was concerned about their security.

"He was in great pain and just said 'they must come very quickly now'," his distraught mother said.

"I am stunned. I can't believe my child is gone.

"He did so much for us and he had so many ideals.

Denise Coetzee of the Kimberley Medi-Clinic, where Maritz is being treated, said she was deeply traumatised, but her condition was stable.

The three men are scheduled to appear in Jacobsdal magistrate's court on Tuesday on charges of murder, attempted murder and armed robbery.