Man risks life to save stranger 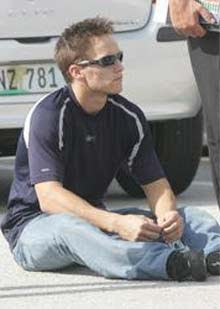 Port Elizabeth - A young man faced a hail of bullets in an attempt to save a stranger's life on Thursday.

Hansie Claassen, 52, a businessman from Despatch, was wounded during a wild shootout in Newton Park in broad daylight.

Claassen apparently withdrew R10 000 from an Absa branch in the area and then went to the MTN building to pay his employees' cellphone accounts.

According to eyewitnesses, three men overpowered Claassen in MTN's parking lot at about 15:00.

Shaun Goosen, 26, who entered the MTN building moments before, heard somebody shout that a robbery was taking place.

Without a second thought, Goosen turned around and ran out of the building towards the robbers.

'They opened fire on me'

"When I had almost reached them, they opened fire on me," said Goosen. Two shots were apparently fired.

Goosen hid behind a vehicle and saw one of the men shoot Claassen in the stomach.

The suspects fled from the scene but fired another shot in Goosen's direction before leaving through the gate.

Eyewitnesses believed it was a miracle that Goosen was not hit. Before the robbers had left through the gate, Goosen jumped up and ran to Claassen to check if he was still alive.

André Bubb, who saw the shooting, said he believed a getaway car was waiting outside the gate.

A white Volkswagen Polo was damaged during the shooting.

"A woman was leaving the parking area when the first shots were fired. One of the bullets hit the passenger door of her car.

"I overheard her telling someone that she had felt the hit," said Bubb.

She couldn't believe that something like that could happen in broad daylight in Port Elizabeth. "I don't think the incident has sunk in yet."

She said her husband had been taken to Livingstone Hospital and might be transferred to Netcare Cuyler Clinic.

Claassen's stepdaughter, Natasha Jordaan, 21, believed it was "pathetic" that somebody could be shot in the middle of the day in such a busy area.

"I always warned him (Claassen) to rather use his chequebook and not to keep so much cash on him," she said.

According to police spokesperson captain Ernest Sigobe, Claassen was possibly followed from the bank, where he had withdrawn the money, to the MTN building.

Sigobe said four men were involved in the robbery. They apparently fled with Claassen's cellphone and the R10 000.

Nobody has yet been arrested in connection with the robbery.

A charge of attempted murder was being investigated by the police.