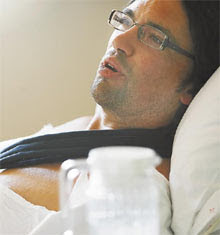 Pretoria dominee Wynand Olivier tells of his brush with robbers while he was out cycling. (Alet Pretorius, Beeld)

Pretoria - "We must begin to fight back against crime," says a dominee from Acacia in Pretoria.

Dominee Wynand Olivier of the Florauna Dutch Reformed Church in Acacia is finding it difficult to preach the message of conciliation from the pulpit, after suffering at the hand of criminals for the umpteenth time.

"Enough is enough!" he said after having to fight off robbers when he went cycling on Thursday.

His car has been hijacked before and there was a break-in at his house.

"My message is: start fighting back. We can't allow these people to keep robbing us and get away with it."

Knocked off his bike

Just past the caravan park at Wonderboom South they saw two men next to the dirt road.

Oliver said from the Little Company of Mary Hospital that one of the men jumped in front of HB and knocked him off his bike. Olivier also landed on the ground.

"One of the robbers grabbed a stick and hit HB on the head, but fortunately he was wearing a cycling helmet."

HB said he decided that no one was going to take his bike away.

"I feinted, and then landed a quick one-two combination."

HB managed to deck the robber with his quick blows.

Olivier, meanwhile was fighting for his life with the other robber who was armed with a knife.

Olivier used his bike to ward off the man's weapon.

"When I saw my chance I hit the man against the head with the back wheel of the bike. I could see that it had opened up his eyebrow."

Olivier can't remember when he was stabbed.

"I've always tried to be positive. Just a few days ago, my neighbour was shot in his driveway.

"I know of at least five people in Amandasig, who have been shot.

"And, week after week, I plead from the pulpit for reconciliation. But, I can't any more.

"If I got an offer to work in London tomorrow, I wouldn't think twice about leaving."