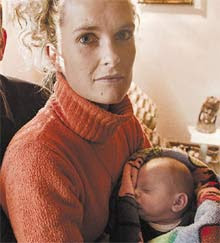 Pretoria - A Pretoria mother and her two babies had a miraculous escape from hijackers when she jumped from a moving car with her two babies clutched tightly in her arms.

Elsabe Taljaard, 27, her husband Thys, 43, and their two sons, one-year-old Roelof and eight-week-old Ruan were attacked at their house in Alouette Street, Elardus Park at about 19:15 and robbed of their car by four armed men.

Thys said he and his wife had just pulled into their garage when the drama began.

"When I opened the car door, they were standing there - all four of them.

"We started fighting and one of them pressed his gun to my head. I just stood still.

"Another robber pressed a firearm to my wife's head and tried to steal her jewellery."

"I handed over the car-keys to them and one of the robbers got in."

Thys said Ruan was still in his baby-seat in the back and Roelof was sitting on his mom's lap.

"The robber suddenly reversed out of the garage at high speed, tearing off the door on my wife's side.

"He drove about 300m down the road, turned around and drove past our house again.

"Meanwhile, my wife had managed to get the baby out of the baby-seat and when they were about 400m from our house, she jumped out clutching them both, " said a still-shocked Thys.

Elsabe and the two children apparently were not injured.

He was shot when he and Thys ran after one of the robbers.

Van Tonder's wife Michelle, had seen what was happening at the Taljaards.

She called her husband, who ran out "and shouted at the robbers to scare them off".

"He shouted that they should leave the mother and children," Michelle said.

"The Lord is our shepherd, but we must also do our bit," she added.