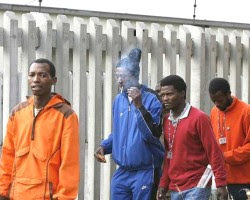 Facing the music: The much-awaited trial of the notorious Sandton Knife Gang has finally got under way. Photo: Boxer Ngwenya, The Star
July 05 2007 at 07:50AM

One of the families terrorised by the notorious Sandton Knife Gang has fled South Africa and another are considering abandoning what they describe as "the best country in the world".

The much-awaited trial of the men accused of breaking into some of the country's most secure homes, and using their victims' kitchen knives to execute the robberies, finally got under way on Wednesday.

A day earlier, police revealed that violent house robberies in South Africa had shot up 25 percent, and Sandton topped the list of affluent areas most targeted.

A brave Brenda Ward relived how she and her husband were robbed while their nine-month-old son slept next door. When asked to identify the knife-wielding men who attacked her, Ward stepped out of the witness stand, walked along the dock and slowly stared into the eyes of each of the eight suspects.

If the Wards immigrate, 20 of their business employees would be out of work and their families without a breadwinner.

When magistrate Renier Boshoff asked whether they had made up their minds, Ward said: "We've applied, but, considering that this is the best country in the world, we're thinking about it."

Ward said she only recently began sleeping again and could not forget the horror of waking up to three robbers jumping onto her bed about 4am. She was recovering from being an "emotional wreck".

Police arrested the suspects in July last year, after they had allegedly breached at least 18 secure complexes. During their alleged spree, they are suspected of stabbing an 18-year-old karate champion and at least three other victims.

One Sandton man was stabbed 17 times. The gang allegedly fled with up to R700 000 worth of stolen goods per attack.

Lehasa, Simon Shilenge, Tshepo Foster and the Quvane brothers - Siphelele, Mluleki, Gigimane, Richard and Dumisane - have been charged with 21 counts of housebreaking, robbery, attempted murder and possession of stolen firearms.

The trail covers 17 robberies that the state hopes to pin on the gang. On Wednesday, all the accused pleaded not guilty.

Ward and another witness, Lesley Maxwell, described how they awoke to find intruders in their bedrooms.

Both families were tied up and guarded while the gang ransacked their homes and loaded up their cars.

Maxwell's gold Jaguar was stolen and the Wards lost their BMW X3 and Audi A4 convertible. The cars were, however, recovered.

In both robberies, the gang fled with electronic goods, clothes and the family's firearms.

Maxwell testified that he woke up after he heard his wife having "a bad dream". It turned out she was already struggling with the robbers.

For both families, the terror lasted more than an hour.

At the Ward home, the attackers - who wore black beanies and dark clothes - apparently waited in the back garden before striking.

The trial was postponed to early September and is scheduled to take five days.

This article was originally published on page 2 of The Star on July 05, 2007