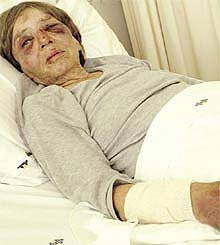 Johannesburg - Elise Havenga, 70, prepared herself for the worst when two attackers walked into her bedroom in the security complex Boskruin Gardens in Randburg on Monday morning.

She was beaten up and when she regained consciousness, found herself lying tied up in a pool of blood.

Havenga was beaten black and blue and her arms and hands were covered in cuts and bruises from warding off the blows.

She was kept in Olivedale clinic on Monday night to monitor her head wound.

Punched her in the face

Havenga said she had woken up just before 02:00 because of strange noises.

"It sounded like the tiles on the roof and there was a sudden sharp noise. I got up and walked around the house, but everything looked normal to me."

Back in bed she began reading a newspaper. She probably fell asleep because her bedside lamp was still burning when the two robbers walked in.

"I saw just two of them and the back one had something black in his hand. I assumed that it was a firearm. One of them started to say something but I just screamed."

One of the men walked around the double bed and punched Havenga in the face.

She screamed harder and another blow fell.

Havenga does not remember what happened after that, but she woke up on the floor on the far side of the bed.

"I saw the blood and realised that I must have been lying there for quite some time. Both my hands and feet were tied up with scarves."

She managed to free her hands, but had to wriggle her feet out because the knots were so tight.

She unlooked the front door and a security guard went to her assistance. Meanwhile, neighbours who heard her shouting had called the police.

The robbers made off with jewellery, including wedding rings that belonged to her parents and her late husband Herman, who died four years ago.

She also lost her grandfather's gold watch-chain which she had inherited and always wore around her neck.

"I wore the three rings on one finger to have them with me always.

"These things have tremendous sentimental value to me."

They also took her DVD player, CD player, cellphone, a digital camera and liquor from the cabinet.

Havenga said it was very difficult for her to accept that crime had become so much a part of people's daily lives.

You may need to use a flv player to view the downloaded file, such as flv 1.3.3

Please upload it to other websites that doesnt censor videos, like Zippyvideos.

We urge all the readers to download this video. It is proof of the crime and genocide committed in the name of Nelson Mandela and the ANC.