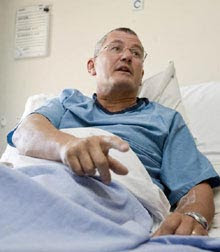 SAA pilot Nico Grobler, 52, recovers in hospital after being attacked by robbers in his bedroom.

Pretoria - An SAA captain is in hospital with a bullet wound after robbers attacked him and his wife on Tuesday - for the second time in four days in a "safe" security complex in Pretoria.

Thieves also broke into Nico Grobler, 52, and his wife Poppet's house on Friday and stole her television set.

Two armed men attacked the couple in their bedroom in Mooikloof Gardens about 02:00 on Tuesday.

"One of them seemed to be having trouble cocking his gun and I charged at him," said Grobler from his hospital bed in Pretoria East Hospital.

A shot went off and hit Grobler in the leg.

In the pandemonium Grobler closed the bedroom door and locked it, keeping the robbers out. His wife wasn't injured.

Grobler got up about two hours earlier, after their two Jack Russels started barking furiously. The two dogs can get out from the garage, but a door between the garage and the house was locked.

"They desperately wanted get inside the house, which they don't normally do," he said.

At least two robbers must already have been on the premises at the time. They broke open the back door, sneaked into the house and overpowered the couple in their bedroom.

That's when Grobler overpowered the robber while he was struggling with his gun.

"I don't know why I charged at them. My action was triggered by him battling with his gun. I couldn't just sit and wait for him to fix the gun," said Grobler.

The robbers grabbed Mrs Grobler's handbag on their way out.

"10111 (the police emergency number) failed to answer and I was sitting in the bathroom, bleeding.

"I called the head of the complex's security and the guard at the gate and eventually the police arrived. The robbers must still have been inside the complex, because there's no way out. And it is supposed to be safe inside," said Grobler.

He would probably be discharged from hospital on Wednesday.

Armed burglaries have increased by 25% over the past year, according to the latest police statistics.

The couple already had a 2,4m wall surrounding their house and on Tuesday had an alarm system installed in addition.

Grobler has been a pilot with SAA for the past 29 years. "It's a flesh wound. It didn't hit the bone. I will still be able to fly.

"I'm scared and angry. This is the second incident in four days inside a security complex," he said.