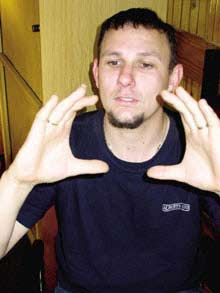 Kallie Kriel, who was hijacked and forced into the boot of his car, shows the size of the hole he made by kicking out the brake lights to let his leg hang out. (Elise Tempelhoff, Beeld)

Sasolburg - The victim of a hijacking who spent hours trapped in his car's boot was so desperate to get help - and fresh air - that he kicked out the car's brake lights and let his leg hang out to attract attention.

He kicked out one of the brakelights with his heel and pushed out the other one with his elbow because his hands were tied and he was lying with his back to the rear of the vehicle.

Kallie Kriel, 26, a salesperson from Alberts Auto, said he was driving through the industrial area of Sasolburg at about 12:00 on Tuesday on his way back to work when a man suddenly jumped in front of his car.

"I indicated to the man through the window to be more careful, as I could have knocked him over," he said on Thursday.

Kriel said the next moment he turned his head to the right and looked into a pistol. He went "ice cold" and realised he was being hijacked. The men forced him to open the doors.

A third, "elderly man who spoke only Sotho", got into the Volkswagen Fox with the two younger ones.

The two younger men ordered him in "perfect Afrikaans" to drive to Heilbron.

One of the men kept the gun pointed at Kriel, asking him whether he wanted to stay alive.

They later forced him to turn off in the direction of Deneysville.

'I was afraid of dying'

The men told him to get into the boot.

"I refused and told them I suffered claustrophobia."

The men tied his hands behind his back, put the muzzle of the gun inside his mouth and "beat him into the boot". They slammed the boot shut and drove on.

"It was pitch dark. I was having difficulty breathing and it was very hot. I kept thinking about my baby son, Tristan. I was afraid of dying."

Kriel realised his cellphone was still in the back pocket of his pants. He took it out and "climbed with his legs through his tied arms. With his arms in front of him, he was able to remove the radio's loudspeakers in the back window. "A bit of light and air was allowed in."

Kriel called his father Kallie, his employer Christo Alberts and the police. He also called his wife Sandy, but she couldn't hear him because of a poor signal.

Kallie Kriel snr later called back and told him to kick out the brake lights. He put one of his legs through the opening and hoped somebody would realise something was amiss. Several cars passed.

He then heard the hijackers quarrel. One told the driver to stop and that he "didn't want anything more to do with the affair".

The car stopped and he heard the doors slam. It suddenly became quiet. He waited for "what felt like hours".

First an Albany bread delivery truck and later corrective services officials stopped and forced the boot open to free Kriel. There was no sign of the hijackers.