'No, I'm not going to Voertsek' 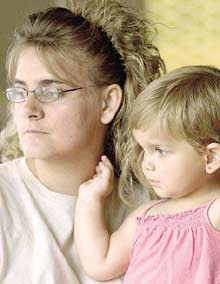 Nicolene Prinsloo and her daughter, Megan, from Kempton Park, who were hijacked in front of their house. (Mario van de Wall, Beeld)

That was the response from three armed hijackers when a young pregnant woman from Kempton Park begged them to hand over her two-year-old child before they drove off with her vehicle.

"Please, give me my child! Gee asseblief net my kind!"

Nicolene Prinsloo, 28, begged the hijackers in English and Afrikaans while they pointed their pistols at her.

Her daughter Megan, 2, was sitting in the front passenger seat at that stage, crying hysterically.

"The one hijacker shouted at me to 'Voertsek!'. I said 'No, I'm not going to Voertsek. I'm waiting for my child."

The nightmare took place in front of Prinsloo's house at 06:15 on Friday morning.

Woman shot in nearby hijacking

Shortly after Prinsloo's car had been hijacked, a 60-year-old woman was shot nearby, while being hijacked in her driveway.

Captain Jethro Mtshali said the woman had been shot once in the chest and thrown out of her vehicle.

"The hijackers then sped off in her vehicle. She was taken to hospital in a critical condition," Mtshali said.

Prinsloo said she had climbed out of her car to close the gate when she heard a car stopping behind her.

"Two men with pistols jumped out of the car and ran towards me. A third man remained seated in the car. The first thing they wanted was my wedding ring."

She struggled to get it off because she's 12 weeks pregnant and both her hands and feet are swollen.

"When the one hijacker saw me struggling he thought it was deliberate and started being rough with me. They took all my jewellery, my handbag, ID documents and everything."

Meanwhile Megan, who was still in the car, started crying loudly.

"One of the men jumped in behind the steering wheel and I knew they were going to drive off with my child and kill her.

"I became hysterical and pleaded for him to give me my child. After I had repeated my plea several times, he picked her up and gave her to me."

Prinsloo ran into her house with Megan in her arms while the hijackers made off in her car. Megan now keeps asking "Mommy, what has the 'oom' done to your car?"

She said she and her unborn baby are fine, and she and her family had relaxed at a holiday resort in Vereeniging over the weekend.

The robbers fled with all their holiday luggage, which was in the boot of her white 1996 Honda Ballade, registration number CXB281GP.

Four years ago Prinsloo and her husband André were also involved in a hijacking drama when three men robbed them at a friend's house in Edenvale.

"They also took my wedding rings. But they couldn't start the car and they sped off in their own vehicle," she said.

Mtshali could not confirm Prinsloo's incident on Sunday.