'We just need a miracle' 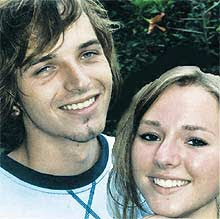 Ryan Holmes and his girlfriend Tanja Lendowsky in January. (Beeld)

Pretoria - After being too scared to go out at night since being held up by armed robbers at his home six weeks ago, a Midrand Tukkie student ventured out for the first time on Sunday - only to be hijacked and shot in the head a few hours later.

Engineering student Ryan Holmes, 22, was still in a coma and fighting for his life while his shattered parents and girlfriend kept watch day and night at his bedside in Johannesburg's Milpark Hospital.

"And to think I was actually glad that he wanted to go out on Sunday night. I still told him: 'Go and enjoy yourself with your friends'," his emotional mother Dale said to Beeld.

Holmes and Tanja Lendowsky, 19, his girlfriend of one year, had gone with friends to the Fourways Mall in Johannesburg to play mini-golf.

Shot into his head

Afterwards he took one of his friends home and went to Lendowsky's house in Vorna Valley, Midrand with her.

At about 21:00 they were turning into the driveway at Lendowsky's house when three men in a white Volkswagen Golf suddenly stopped next to them, forcing them to stop, his mother said on Tuesday.

When Holmes tried to drive off the men jumped out and without saying a word pushed a pistol through the half-open window on the driver's side and fired a shot into his head, at point-blank range.

According to Lendowsky he slumped forward, and a few seconds later the robbers pulled her out of the car, took her purse and her cellphone, and ripped a ring off her finger.

The seriously wounded Holmes staggered towards her from the car before the robbers jumped into both vehicles and sped off.

Holmes collapsed on the spot in his blood-soaked clothes.

Lendowsky said on Tuesday that after screaming hysterically for help, she sat next to Holmes desperately trying to keep him conscious.

His one eye was already swollen closed from the bullet that had lodged behind the eyeball.

"I asked him repeatedly if he could still see me," Lendowsky said.

"Yes, you look beautiful," was his reply.

Shortly before he slipped into unconsciousness, with blood still streaming from his mouth, he kissed her on both cheeks.

He was still in critical condition on Tuesday night.

"But we are. We just need a miracle," his father Clyde Holmes said on Tuesday.