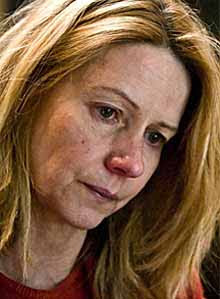 Professor Margaret Slabbert recounts the night of horror when her husband, Gerhard, was shot dead in front of her at their home in Brooklyn, Pretoria. (Theana Calitz, Beeld)

Pretoria - A University of Pretoria professor is heartbroken and still fighting back tears after she saw her husband shot in the heart in front of her at their home in Nicolson Street, Brooklyn on Wednesday.

A 13-year-old girl was shot in the leg in the same street in an attack by armed men on Saturday night.

Professor Margaret Slabbert, 51, of the university's visual arts department spoke of her sorrow on Thursday as she recounted what had happened at about 22:00 on Wednesday.

The Slabberts had returned after taking their sons's car to him.

Slabbert said: "When we turned into the drive of our panhandle property, a man was climbing over the wall."

"I was driving. My husband got out of the car and asked the man what he wanted.

"When my husband asked him a second time what he was looking for, I saw the man take something out of his pocket. It was a firearm.

"Unfortunately, my husband realised it too late. The moment he saw what was happening, he tried to jump back into the car.

"The guy shot him in the heart," she said.

With her husband on the seat next to her, Slabbert reversed up the driveway and sped to a nearby hospital.

A doctor there told her it was "over".

Slabbert said: "There was no reason for the man to shoot my husband. He could have just run off.

"Gerhard was a wonderful person. Everyone was mad about him.

"All that I know is that my children must get out of here (South Africa) as soon as they can," she said.