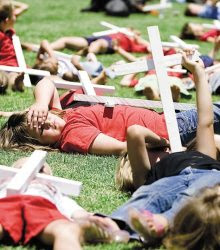 Some of the 2 400 children who gathered at a rugby field in Pretoria to remember victims of crime. (Herman Verwey, Beeld)

Pretoria - About 2 400 children gathered on a rugby field in Suiderberg on Tuesday to honour all South Africans who had lost their lives because of crime.

The children from Booysens Primary, Saamspan Primary and Suiderberg High carried white wooden crosses in the hope that the government would hear their plea for safety.

In about 2 000 letters to President Kgalema Motlanthe, the children asked him to address the crime problem, because they were scared of going to bed at night.

"About 90% of the children are asking in these letters for the reinstatement of the death penalty," said Kobus Hermitage, organiser and chairperson of the South Africa Against Crime action group.

"Something must be done urgently about crime in our country. Our children are too scared to leave their homes."

Tanya Engelbrecht, 16, and Lavonne Benade, 16, pupils at Pretoria Tuine Technical High School, accused the government in their speeches of not being able to bring crime under control.

"We don't even have a police force we can trust, because they're getting away with murder," Tanya said.

"We have to stand together to fight crime in our beautiful country.

General Siphiwe Nyanda from the ANC's National Executive Committee admitted there were problems in the policing system.

"We have to take responsibility for the deeds that were committed and the poor way in which crime has been handled."

Frik van Wyk of the Freedom Front Plus said he was disturbed by the way in which crime had been handled over the past 14 years.

"It has taken the governing party 14 years just to admit there is a problem. Will it take them another 14 years to do something about it?"

Hello Whites of all South Africa!

I´ll translate this article to "publish" in my Blog.
http://identitario.tk/

"Bloque Identitario" is Kaputt.
My next comment going to have the link to the article in Spanish.
People must know thats happend in South Africa. Sorry my bad English.

this is the link to this post in Spanish!