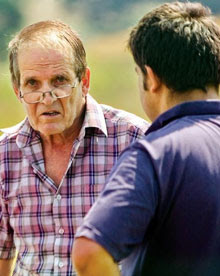 TRAGEDY: Wolfram Ebel stands on the N14 highway in Johannesburg where his friend was shot to death. (Herman Verwey, Beeld)

Pretoria - From underneath his broken-down car on the N14 highway, Wolfram Ebel heard his friend, who had come to help him, shout: "Leave me alone, leave me alone!"

Furrutter, owner of Dieter Car Sales in Randburg, died on the scene. He was in his 60s.

According to Ebel, also in his 60s, his Jeep started giving trouble on the N14 highway at about 12:00 as he was travelling in the direction of Pretoria, said police spokesperson Constable Patricia Simelane.

He was on his way to Swaziland when the vehicle gave out about a kilometre from the R511 offramp at the Diepsloot squatter camp. The Jeep was leaking oil and water.

Ebel called Furrutter, from whom he had bought the vehicle a while ago, and asked him for assistance.

"While he was waiting, Ebel crawled under his vehicle to try and find out what was wrong," Simelane said.

"While he was underneath the vehicle, he heard the deceased park his car near his. A few seconds later he heard Furrutter arguing with people.

"Then Ebel heard a shot and Furrutter shouting: 'Help, help, I've been shot!' "

Furrutter was shot in the neck. He died next to his Mercedes-Benz.

When Ebel got out from underneath the Jeep, one of the attackers grabbed and searched him.

Without assaulting him, they took his cellphone and R3  000 and fled over the highway into Diepsloot.

Simelane said Ebel wasn't sure whether there were three or four men, but one was wearing a blue T-shirt and another a black T-shirt.

One was carrying a handgun.

A passer-by called the police after the incident.

Scores of policemen and reservists were sent into Diepsloot shortly afterwards to try and find the gang.

A police helicopter was also used in the search, but at the time of going to press the search was still on.

Ebel made a statement at the scene.

He had to watch his friend's body being loaded into the hearse. Then he had to get back under his Jeep to try and repair it.

Hello! No matter what the nation it is not right to murdur,rape or do other crimes or sins against our fellow man.Since God loves all mankind as his creation and so should we ! The only real way of doing this though is to have a change of heart by repentance toward God and faith toward our Lord Jesus Christ.Acts 20:21. This is found in Gods preserved word,the Authorized King James Holy Bible. God sent his Son,the Lord Jesus Christ into the world to save sinners from their sins and this includes every human being no matter what there colour or nationality. He was born of a virgin,lived a sinless life,and died for all our sins on the cross,2000 years ago.And shed his sinless blood as the only sacrafice for sins God will accept.He was buried,and rose from the dead the third day,was seen of men,and went back up to heaven.The only way to miss hell fire forever for our sins at death and make it to Gods heaven is to repent or have godly sorrow for our sins and turn from them and trust Jesus Christ as your personal Saviour and Lord God. Sincerely; George ,www.TheGospelHour.org or www.Unshackled.org or www.FBNRadio.com or www.FellowshipTractLeague.com