Man shot while mowing the lawn 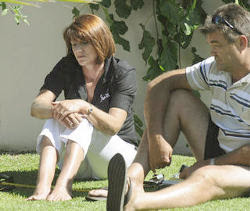 Man shot while mowing the lawn

By Melanie Peters and Helen Bamford

A Blaauwberg man, mowing his grass verge on Friday, was gunned down just for his cellphone.

This was but one of a series of brutal crimes committed in Cape Town in the past 24 hours. One attack involved a police officer who is now facing charges of attempted rape and murder. A third took place at the country's oldest wine estate, Groot Constantia.

Alexander Bezuidenhout, 52, was mowing the verge outside his West Beach home in Warwick Road at about 2pm. As he went inside to fetch black bags two men entered the yard through the open gate.

Superintendent Mark Romburgh said: "He went out to find out what they wanted. A single shot was fired. He was shot in the head, killing him instantly.

"They then took his cellphone and ran."

Bezuidenhout's wife, 49, had her chain ripped from her neck.

"We have launched a search for the suspects and opened a case-docket of murder and armed robbery," said police spokesperson Senior Superintendent Billy Jones.

On Friday Bezuidenhout's wife was sitting outside on the freshly cut grass with her head in her hands. She was too traumatised to talk and was comforted by two friends.

The couple's shocked neighbour, Graeme Cox, said: "I heard a shot. His wife must have pressed the panic button because the security and police arrived very quickly. A domestic worker from up the road said she had seen the two men walking round for a while.

"It's terrible, the Bezuidenhouts just moved in about six months ago."

Police spokesperson Jones said three men, one wearing green gloves, forced their way into the house on the property.

They woke the woman, a teacher, 25, at around 2.30am, demanding money and other valuables. One thief held up the woman with the screwdriver while the other two searched the house.

They left with cash, a laptop computer, an iPod, jewellery and a suitcase of clothes.

They have not been arrested.

Meanwhile, a police officer based at Diep River faces charges of attempted rape, armed robbery and attempted murder after allegedly breaking into a house occupied by three people in Parow.

The constable, 27, from Kensington, allegedly took R300 before forcing them into a bedroom.

He made the woman undress and tried to rape her. When the men tried to stop him he shot one of them in the side.

He was arrested at the scene and is due to appear in court on Monday.

This article was originally published on page 1 of Cape Argus on January 17, 2009