'I prayed he would wake up, but he never did' 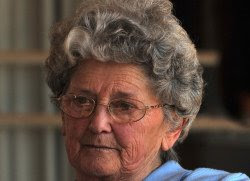 On Wednesday Wim van den Bosch, whose parents were murdered in a house robbery on Good Friday, came close to losing his own life when he was shot as he and other residents raced to the rescue of a friend's farm workers who were being attacked by a gang of armed robbers.

Bosch and the other residents were having a crime-fighting strategy meeting when they heard gunshots at his friend Ken Inngs's property. Their efforts were too late for Inngs's foreman, David Malema, 35, who was shot dead when he walked in on his colleagues being terrorised on their employer's Boschkop farm.

About 10km away, farmer Bob Round, 79, was gunned down as he fought off three robbers who had broken into his smallholding in the Shere Agricultural Holdings on Thursday. He was shot less than 12 hours after Malema bled to death as a result of a gunshot wound.

The murders are the latest in a string of attacks on Pretoria homeowners which have claimed the lives of five people and left five seriously injured over the past the 12 days.

'He was all over them'
Despite the business community and homeowners demanding answers from city authorities and police as to what is being done to stop the seemingly unstoppable terror onslaught, the attacks are continuing.

Two of Round's suspected killers were caught shortly after the incident when they fled across a hill into Faerie Glen where they opened fire on police dog unit members and officers in a helicopter tracking them.

Round was shot and bludgeoned to death when he confronted his three attackers, who were stealing his camping chairs from his Catherine Street home, situated close to the Hans Strijdom and Lynnwood roads intersection.

One of his workers who was getting ready for the day, raised the alarm when he spotted the men breaking into his tool shed.

Round, who left his wife of 48 years, Myra, locked in their home, immediately ran outside to confront the men.

'He stood up again and again and carried on fighting'
According to the worker, who police asked not to be named for security reasons, Round tackled one of his killers and wrestled him to the ground.

The worker was in tears when he described to Myra how hard her husband had fought.

Myra found her husband sprawled against the wall of the tool shed, his hand over his face.

"When I heard the shots I tried to run, but I have just had a hip replacement and I could only hobble. I kept calling him telling him to hang on, telling him that I was coming, but when I got to him he was gone.

"I called his name and told him 'don't go', but when he did not answer I knew he was dead. I kept on praying that he would wake up, but he didn't. My Bob is gone," said Myra, wiping away tears.

Round said her husband was always concerned about his community's security and would radio neighbours every night to check that they were safe.

"He loved this community and its people. What has happened is such a waste. It is useless and is happening more and more," she said.

Wim van den Bosch, describing his attack, said he was grateful to be alive.

Van den Bosch was shot when he spotted a man with a torch near the farm.

"As I began to question him I saw him move and I turned. As I turned he shot me in the chest," he said, adding that the robbers had escaped.

Inngs said Malema had bled to death after being shot when he confronted the attackers.

"He tried to help his colleagues and was shot," he said.

This article was originally published on page 1 of Pretoria News on July 24, 2009