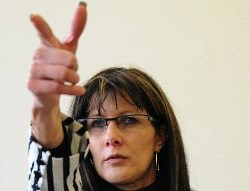 "When I saw the gun I went blank I didn't think. I just ran."

These were the chilling words of Pretoria mother of two, Ronel Botha, as she described her family's ordeal at the hands of two gunmen who attacked their Pierre van Ryneveld home on Sunday night.

Botha had managed to flee back into her house after she was confronted by the gunmen when she ran outside after hearing a loud bang caused by what she thought was her husband crashing into their garage.

"All I could think about was my son. When the footsteps stopped I thought we were dead. I thought the man on the other side of the door was going to shoot."

'When I saw the gun I went blank I just ran'
Instead, she found the two men standing over her bleeding and screaming husband, Jan, 51, who had been shot through the pelvis with a Colt .45 at point-blank range.

The gunmen had launched their attack moments after Jan Botha, a Community Policing Forum (CPF) member, had returned home and was about to park his son's silver Opel Corsa.

Botha on Monday recalled the family's terrifying ordeal from Unitas Hospital where her husband is recovering.

Miraculously, the bullet, which tore through him, missed all his vital organs.

Botha described how, as she screamed in fear, one of the gunmen charged her down, pushing a gun towards her face as she stood in the doorway metres from her husband.

'I would never forget the sound of the footsteps'
"When I saw the gun I went blank I just ran."

Botha slammed shut the front door as the gunman shoved his weapon into her face.

She screamed to her teenage son, Ruan, who was inside the house, to run before she grabbed a radio linked to the suburb's CPF and pleaded for help.

As mother and son charged into the bathroom, she locked the door and waited, putting herself between Ruan and what she thought was inevitable death.

"I have never been so scared in my life. All I could think about was my son. When I heard the front door being kicked in and footsteps coming down the passage and then stop outside the bathroom I thought we were dead. I thought the man on the other side was going to shoot," she said.

She did not then know that the man on the other side of the door was their neighbour, Jaco Engelbrecht, who, after hearing the gunshot, had run to the family's rescue.

Engelbrecht, who had seen the gunmen drive off calmly "without a care in the world", led the terrified mother and son from the house to the injured Botha.

They wrapped him in a blanket and comforted him until an ambulance arrived.

Botha, describing the shooting from CCTV footage from the family's home security system, said the gunmen had opened fire without warning.

The footage shows a white Toyota Corolla driving up and down outside Botha's home moments after he arrives home.

Minutes later, two men are seen approaching the house, lifting the electric driveway gate off its runners and sliding it back before they enter the property and hide behind bushes waiting for Botha.

As Botha is about to park the Opel Corsa, they run at him and shoot, rifling through his pockets, grabbing a cellphone and car keys as he lies bleeding on the ground.

While one of the gunmen is seen starting the car, the other charges at Ronel Botha before running back to open the driveway gate so that his accomplice can drive off.

The gunmen were forced to abandon the car several blocks away when its anti-hijacking device stalled the vehicle.

They then fled empty handed.

Botha said she would never forget the sound of the footsteps.

"I thought we were going to die. That sound and seeing my husband on the ground screaming and bleeding will stay with me forever," she said.

Unitas Hospital spokeswoman Isobel Fowler said Botha had undergone a successful operation and was in a stable condition.

Police said no arrests had been made in connection with Botha's shooting.

"The investigation is at a sensitive stage. Investigators are trying to link those behind the attack to other recent attacks which have happened across Pretoria," he said.

This article was originally published on page 1 of Pretoria News on July 21, 2009