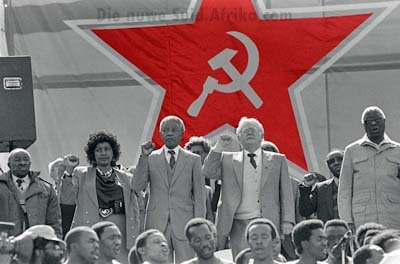 By Afrikaner of Samizdat Blog.

Many newspapers are carrying front-page articles about St. Mandela's 91st birthday tomorrow (18 July). Instead of the fawning hagiographies, let's rather consider the real "achievements" of St. Mandela.

1. Mandela was so "oppressed" that he went to university became a lawyer. He was allowed to practice law with his partner, Oliver Tambo. This strangely happened in apartheid South Africa in 1953, in which it is routinely alleged blacks were denied proper education.

2. During the Rivonia trial Mandela was convicted of plotting to overthrow the previous government by means of military action. Had the plan succeeded, thousands of "freedom fighters" would have sown terror and mayhem in South Africa. Mandela was therefore far from an innocent pacifist and his jail sentence was nothing if not fully justified. It remains a mystery why Percy Yutar, the prosecutor, did not call for the death sentence, which would also have been justified given Mandela's treasonous intentions.

3. In 1961 he was one of the founders of Mkhonto we Sizwe - the "pricks (sorry "spears") of the nation", a murderous bunch of cowardly terrorist thugs, known mainly for their prowess at mowing down innocent civilians. As a military force, Mkhonto was however a complete joke, in spite of the so-called "Freedom Park's" memorial to them. Mkhonto failed to "liberate" one square centimeter of South African territory. Instead, nests of this infestation were routinely exterminated by the former SA Defence Force.

4. Mandela admits in his book The Long Walk To Freedom that he personally approved the Church Street bombing, in which 11 people died and more than 200 were injured. Most of them were innocent civilians.

5. He remained in jail because he refused to renounce violence. The previous government did offer to release him provided he renounced violence. Hardly Mother Theresa stuff.

6. After he came to power, his regime wasted no time in befriending rogue states like Libya and Cuba and imposing the state racism aimed at whites known as affirmative action and black economic empowerment.

Like Mohammad Atta and Carlos the Jackal, this person is no hero, no saint and definitely not worthy of our admiration.