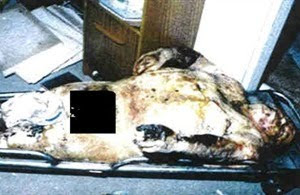 South African Afrikaaner farmers have since the fall of the apartheid regime fallen victim to a wave of murders that are appalling in their sadistic brutality. The small take in the robberies accompanying many of these murders is grotesquely overshadowed by the depravity that accompanies them. Many of the victims are elderly. Since crime statistics have to be approved by the government of South Africa, it is difficult to get a handle on the magnitude of the problem. The Dissecting Leftism blog reports as follows on this process of dispossession and extermination that has been banished from the mainstream of political discourse.

"At the beginning of the decade there were 40,000 White farmers in South Africa and there have been is 3,037 murdered in racial genocide and more than 20,000 armed attacks perpetrated by groups of militant, young Black racists on commercial farmers, since the ANC came to power in 1994. This is certainly higher as the South African government and police, with the world’s press keep it covered up. Boers are often tortured or raped first, by boiling water forced down their throats, tendons cut, burnings, personal humiliations - most perpetrators are protected by Blacks within government and the police and not tried. Now ask yourselves, gentle readers, when did you see this on television news or read about it in your quality newspaper?

The idealism that accompanied the birth of new South Africa has been destroyed by black rule yet the rainbow nation is still a fantasy to Western elites. They need to believe in it or face the reality that racial equality does not exist. The dream of truth and reconciliation and the deification of Nelson Mandela make it hard to accept that after whites gave way to Blacks the Boer minority would be subjected to racial genocide. Boers, you see, have not been sentimentalised, are not figures of sympathy but dehumanised as racists so their murder is not seen as important."

In an attempt to sanitise the problem, the South African government has banned the use of the term "farm murders". The intent is to present the farm murders as random events rather than the ethnically targeted murders that they really are.

"Shaya Ma Buru",( Kill the Boer) is an African national congress resistance song that is still sung at national gatherings. In the days of apartheid, "Boer" referred to Afrikaners in general, as well as the state at their disposal. The "Boer" of today is a farmer in the originally intended meaning of the Afrikaner word. He is disarmed in a state in which he is a grudgingly tolerated minority.

"Shaya Ma Buru" is hate speech. It is but one dimension of a general campaign of extermination and dispossession of South Africa's Afrikaners, who have no other homeland in the world. They are in a real sense one of South Africa's tribes.

Where do we go from here? Will South Africa make the same mistake made in Zimbabwe? Will it destroy its agricultural sector and plunge South Africa into inflation and economic chaos? Or will history go full circle with despairing Whites carving their own homeland and haven of safety out of a hostile country? Eugene Terre Blanche, head of the AWB (Afrikaaner Resistance movement) is reviled in the mainstream press as a Nazi. but what is wrong with defending a people that is threatened with ethnic cleansing? The Australian reports as follows on Mr. Terre Blanche.

"ARMS outstretched, his deep voice resonating around the town hall, the white-bearded speaker summoned the Afrikaner "volk" to battle, with rousing words from the past. "Now is not the time to be afraid," he shouted, to grumblings of approval from the audience of burly, khaki-clad farmers, their wives and children. "Now all true Afrikaners must reach out to each other and fight to the bitter end."

Eugene Terre'Blanche, the once-feared white supremacist leader in apartheid South Africa, is back. He is more subdued and circumspect than in his heyday in the 1980s, but his message has not, fundamentally, changed.

He told 300 supporters in this small, rundown farming town on the barren veld about 200km southwest of Johannesburg that he was answering the call of the boers (farmers) and revitalising the Nazi-style Afrikaner Resistance Movement (AWB) to save them from the oppression of the black African National Congress government. "Our country is being run by criminals who murder and rob. This land was the best, and they ruined it all," he cried to strong applause, dabbing the spittle off his beard with a neatly pressed handkerchief. "We are being oppressed again. We will rise again."

Who cares about the Afrikaner farmers at all? Has anyone stepped up to the plate to defend the Afrikaaners? Is not the campaign of ethnic cleansing being waged against the Afrikaaners worthy of condemnation? If he is indeed a Nazi, what has been his death toll? And if we are all pious opponents of his alleged Nazism, what has been the death toll of our disgraceful silence?

If South Africa's White minority is driven out, it will ultimately be its Black majority that will suffer. If the blind eyes that are now turned to the bleeding Afrikaaners do not open now, they will open to scenes of famine as are now seen in Zimbabwe. The curtain of silence that keeps the suffering of the Boers from international view is a blot of shame upon our generation. It is time for our silence to end.

Reprinted with permission from Magdeburgerjoe.com A link is included below that would not fit the rantrave format.