'He is with God; he died trying to save us' 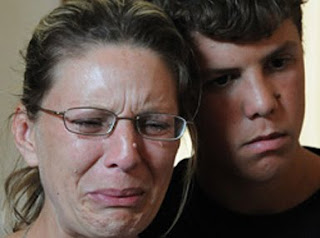 Tragic loss: Nicole Grobler shares her pain after her husband was shot and killed allegedly by robbers at their home in Pretoria. Photo: Damaris Helwig, Pretoria News 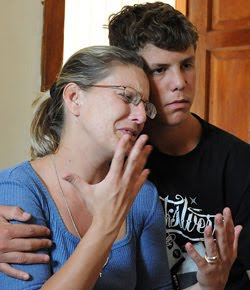 Inconsolable: Nicole Grobler, comforted by her son Marcel, explains how her husband was shot and killed allegedly by robbers at their home in Pretoria. Photo: Damaris Helwig, Pretoria News

"He is with God in heaven. He died so he could save us."

These were the heartbreaking words of Nicole Grobler who, along with her son and daughter, listened in horror from their bathroom as her partner, Gert Wandrag, 47, was shot dead while fighting with a gang of house robbers who attacked his family.

The family now believes that the gunmen, who stole laptops and household electrical appliances, are the same people who poisoned their dogs three weeks ago.

Wandrag, an IT expert, woke up to find two gunmen taking his cellphone off his bedside table in his Doornpoort home during the early hours of yesterday morning.

Screaming at them, Wandrag managed to tackle one of the gunmen and wrestle him to the ground as he fled through his house towards the lounge where Grobler's son, Marcel, 16, was asleep.

As the two men fought, the robber's accomplice beat Wandrag over the back with a chair, giving his partner the chance to pull out his gun and shoot Wandrag in the face and chest.

Wandrag died in front of Grobler and her children as they desperately tried to save him and call for help from a passing police van.

A devastated Grobler said Wandrag was a good man. "He died so he could save us. All he wanted to do was protect us," she cried.

Grobler said she went cold when she heard the first shot.

"We ran to the bathroom and hid. I could hear Gert screaming and fighting as furniture was being broken. Even after the first gunshot went off I could still hear Gert fighting.

"He refused to stop and it was only after the second shot went off that everything went quiet," she said, describing how, while Wandrag had been fighting with his attackers she and her children had crept into another bedroom where Wandrag's nephew and niece were hiding terrified behind their bed.

Grobler said that when she saw a passing police van she began screaming and flashing her bedroom lights so the police could catch the killers, "but they did not see me".

Grobler, describing how Wandrag had died lying face down in his blood, said he was still alive when they reached him. "We tried everything, but it was too late," she said, bursting into tears.

Grobler's brother, Cedrick Beneke, said those responsible did not think about what they were doing.

"They don't care about killing a person's mother, father, son or daughter. They simply don't feel anything about taking away your loved ones. They kill because they can," he said.

This article was originally published on page 1 of Pretoria News on October 12, 2009