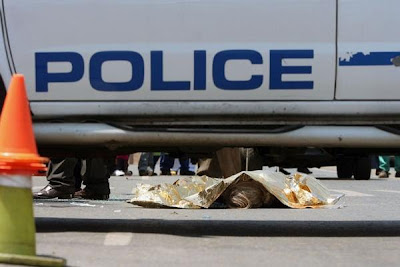 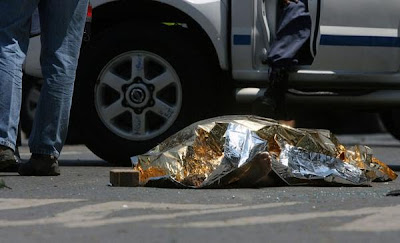 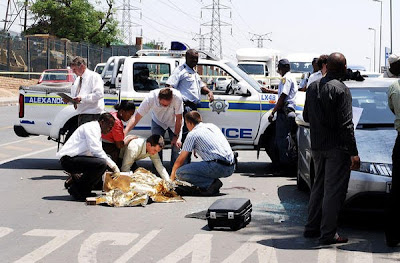 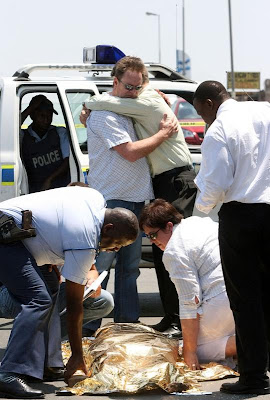 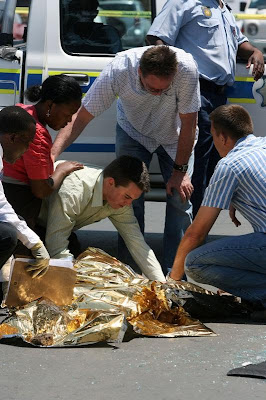 He extended his hand, touched her face softly and kissed it

His wife Bianca, a 24-year-old psychology master's student at Wits University, was shot and killed in a botched hijacking in Alexandra yesterday.

For several hours, her body lay on the road next to her silver Honda Civic outside Alexandra Clinic, where she had worked with mothers and children as an intern under the auspices of the Ububele Umdlezane Parent Infant Project.

Just a day earlier, she had told Ububele co-founder Tony Hamburger how much she loved her work, and working in Alexandra.

Bianca wasn't expected at Alex Clinic yesterday. But she thought she would stop in at the clinic before going to the studios of Alex FM, where she was going to take part in a talkshow on child abuse.
Urged residents to provide police with information

She had just left the clinic and was waiting at the intersection of London Road and 1st Street when two men, one armed, approached her car at about 8.55am.

"A shot was fired and hit her in the lower body and she drove on into London Road, but the car stopped and was found idling. Paramedics tried to resuscitate her, but she was later confirmed dead at the scene," said police spokesman Inspector Moses Maphakela.

"The suspects then fled on foot, empty-handed. One suspect had been identified, and we're hoping to make an arrest soon."

Soon after the incident, Warburton arrived at the scene.

Barely noticing his friends' supportive hands on his shoulders, he repeatedly touched his wife's body, which was covered with a blanket.

Shocked residents stood behind the yellow tape cordoned off by the police as crime scene experts took fingerprints from the car. The driver's side window was shattered from the shooting.

At the clinic, staff were called to an urgent meeting, where they were offered counselling. The clinic's chief executive, Labane Maluleke, said his staff were shaken by the incident, especially since issues of safety around the intersection had been raised with the council before.

"Traffic can be very heavy and fast on London Road, making it difficult for a motorist to join from 1st Street, which we use as we get out of the staff parking area.

"At times it takes about 10 minutes before one can join London Road, and criminal elements are watching that," Maluleke said.

"All we're asking for is for some method of traffic regulation at the intersection - maybe a traffic light - so that motorists won't have to stop for a long time waiting to join the main road. I will pursue this again with the relevant authorities to avoid any further incidents."

Clinic board member Gabriel Ngwenya urged residents to provide police with information that could lead to the arrest of the assailants.

"Bianca worked for an organisation that offered a much-needed service to the community. We don't want this to affect the organisations so that they stop working with us," he said.

This article was originally published on page 3 of The Star on October 15, 2009