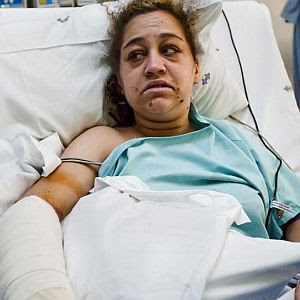 Johannesburg – Two robbers yelled "Voertsek, Voertsek!" at a young student while almost cutting off her arm with a knife as they robbed her of her cellphone on Monday.

The nerves, two arteries, tissue and all the muscles in Ciandi Vosloo's right arm were cut during the attack.

The fifth-year hospitality and catering student from the Centurion Academy was holding her cellphone in her right hand when she was attacked.

Vosloo said from her bed at Unitas Hospital on Tuesday that the pocket knife with which they stabbed her was razor-sharp, and only stopped at the bone.

She was attacked at 13:30 in South Street in Centurion. "I had just finished my last class and was on my way home when two unknown men overpowered me.

"While they grabbed me and cut my arm, I screamed. They just kept shouting: Voertsek! Voertsek!’ and then they ran off with my cellphone.

"It was terrible. I hate them," she said through tears on Tuesday.

Two of her classmates rushed to help her. "They held my arm. I thought I was going to bleed to death and lose my arm."

Her father, Johan Vosloo, said Kallie de Lange and his wife, whose name he didn't know, also helped his daughter.

"De Lange pressed his handkerchief into the wound to try to stop the bleeding before they rushed her to hospital."

He said doctors operated on his daughter for seven hours in order to try to save the arm. "They took a vein from her left leg and put it in her arm.

"I want to know what I ever did to them. I was innocently walking in the street," Ciandi said.

"Because of them I won't be able to write my final exam, which is in a week's time," she added.

Her father said they would only know in about 18 months whether she would recover completely.

"I am so angry. If I find those people, I will kill them slowly," he said.

He said he was even more upset when he wanted to report the matter at the Lyttelton police station and was sent from one end to another. "No one wanted to help me."

He said as soon as his daughter was released from hospital, he would take her to their home in Roodepoort to recuperate.

"We want to thank everyone who helped Ciandi and for all the support we got," he said.

A police spokesperson said on Tuesday night that police officials had been sent to the hospital on Tuesday afternoon to take Ciandi's statement.