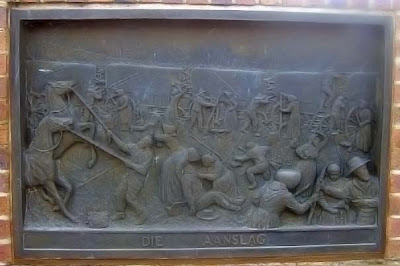 I attended the gathering at the Vegkop battlefield site for about two hours and plead guilty to warning the people there that SA is getting so unstable that organised genocide on the scale of Rwanda is a possibility not to be discounted too lightly.

The discussion around genocide over the past few weeks in Afrikaans was set off, not by a “right-wing bigot” as you continue in your tribal Johannesburg-English way to stereotype Afrikaners, but by the left-wing, ANC- supporting theologian Nico Smith.

On September 11 he wrote an article in Beeld, Pas aan of pas op (Adapt or beware), in which he forecast that Afrikaners insisting on language rights and complaining about affirmative action will end up like the French Algerians who were given the choice of “the suitcase or the coffin” by the National Liberation Front in the early sixties.

No one can deny the wall of hate from the state directed against Afrikaner farmers, teachers, schools, universities, museums, monuments and so on. Huge amounts of taxpayer rands are being spent on court cases and other actions to eradicate Afrikaans from educational institutions and to remove Afrikaner farmers from the land they have farmed for generations.

The nature of injuries sustained in military-style attacks on farms and suburban houses are not of a civil or even criminal nature.

At a recent medical conference on trauma surgery held in the US, a high- ranking officer from the US army called the South African delegate aside and told her: “Judging from the type of injuries you have shown us, I am afraid there is a war in your country. Such injuries do not occur in peacetime.”

I am sorry to disturb you in your liberal dreamworld where you are “cremating deceased livestock and sucking on a beer”, but this country is already engaged in a low-intensity ethnic conflict that may well escalate into dominee Smith’s vision of a white genocide.

The umKhonto weSizwe and Apla- controlled SANDF, of which we have recently seen the levels of discipline, has about 500000 automatic weapons at its disposal.

Likewise, the SABC is the perfect weapon to exhort the majority population to drive the hated white racists or “bigots” into the sea.

The tide of history, as is amply demonstrated by Algeria, the former Portuguese colonies and, of course, Zimbabwe, is against the continued presence of whites in Africa. We are all living under the sword of Damocles.