'The commissioner slapped me on my breasts' 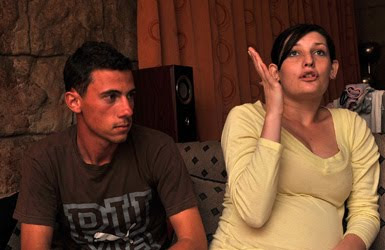 A moot man spent several hours behind bars after being charged with assaulting a policeman who had allegedly just beaten his seven-month pregnant fiancée to the ground.

He said he was also threatened that the police would arrest his pregnant fiancée if he continued with his attempt to lay charges against Solomons.

'When he started pushing me to the car, Marcelle came to help'

Hayman's fiancée, Marcelle Erasmus, 19 said she was manhandled by the police.

"As I tried to inquire why they were harassing my husband and his workers, the commissioner slapped me on my breasts and I almost fell flat on the ground, using my hands to stay up.

"I was surprised that police officers would behave in that way when they were supposed to be protecting citizens. I had never seen anything like that before," said Erasmus.

The drama started on Friday morning when police, including Solomons, stopped and searched Hayman's three employees - Klaas Visagie, Bernades Cupido and David Ngwenya - who were working in the family's 22nd Avenue front garden.

Hayman's father, Peter, claims the police manhandled the trio which upset Erasmus. She asked why police were treating the men in such a violent manner but was told in explicit language to mind her own business.

Minutes later all the police left without arresting anyone

Visagie alleged that while he was being searched, Solomons said "julle boesmanne is op in die wit mense se gatte" (you bushmen are up the white people's backside).

Cupido said he wasn't searched but was told that he would be taken to the police station to be "profiled".

"When he started pushing me to the car, Marcelle came to help."

Peter Hayman said when Solomon forced Cupido into the car, Erasmus touched his arm to prevent him from doing so. Solomon allegedly lashed out at the woman, hitting her hard on her breasts.

As Erasmus fell, Eddie Hayan rushed to her aid. It was then that the three officers apparently attacked Hayman. Solomon allegedly throttled him while the other two beat him with fists and a truncheon.

Peter Hayman then arrived on the scene and pulled the officers off his son.

By that time a back-up vehicle had arrived. Peter alleged that the officers threatened to shoot the family's dogs because they were making noise.

Minutes later all the police left without arresting anyone.

Hayman later went to the police station to open up a charge of assault against Solomons. Solomons evidently warned Hayman that if he opened the case there would be consequences.

But, Hayman opened the case and was given a case number. As he was leaving, he was arrested and detained and told he would be charged with assaulting a police officer.

Solomons allegedly told Hayman's lawyer, who did not want to be identified, that if he didn't drop the case Hayman would spend the weekend in the holding cells.

Hayman did eventually drop the case so he could secure his freedom and was released at about 4pm.

"How can a man of his position behave the way he does and think that he will get away with it?" said Peter Hayman.

Hayman said he would take legal advice on what steps to take against the officers and their station commissioner as he was aggrieved by how they were all treated.

He said Solomons would not explain why Hayman was not arrested.

Independent Complaints Directorate spokesman Moses Dlamini expressed concern about the alleged assault, saying that the matter would be investigated immediately.

"What the police have done and their behaviour is completely incorrect, especially that of the station commissioner, whose alleged conduct is totally unacceptable," he said.

He said the police had no right not to assist a member of the public in opening a case and that if they failed to in this case the ICD would assist the victims.

This article was originally published on page 1 of Pretoria News on November 21, 2009