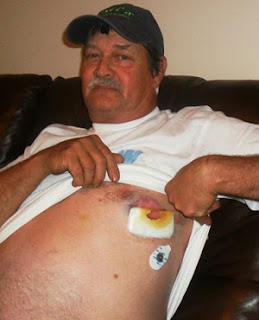 HURT: Pieter Bezuidenhout shows the bullet that went through his side and also hit his brother, Rodney. The brothers rushed to a Pietermaritzburg hospital after both were shot by gunmen. (Sandile Waka-Zamisa, The Witness)

Pietermaritzburg - Two brothers, who narrowly escaped death in a dramatic shooting on Monday, drove through morning rush-hour traffic with blood dripping from gunshot wounds to get to a hospital in Pietermaritzburg.

Pieter, 57, and 59-year-old Rodney Bezuidenhout are recovering from neck and stomach gunshot wounds respectively after they were shot by gunmen at their workplace in the Mkondeni industrial area.

"The bullet went through my neck, from one side to the other. The doctor said if it was one centimetre further I would be dead," said Pieter.

"They were shooting to kill, they were there to kill us."

The two brothers were driving towards their workplace at Wayne's Scrap Metal when they were attacked by four gunmen.

"I saw this vehicle was driving straight at us, but when I slowed down, this car stopped right in front of our bakkie blocking my way."

Tried to drive off

Pieter put his vehicle in reverse.

"When I tried to [reverse], a man jumped out from the passenger seat with a gun in hand and cocked it. I shouted to my brother to lie down.

"Another gunman jumped out and fired again, the second bullet went through the passenger's door, hit my brother on the side of his back and went out through his stomach and hit me on the side, ricocheting on my ribs."

While the guns were blazing, Pieter did not stop, but put the bakkie in first gear and drove off.

"I could feel that I had been hit in the neck and my brother was shouting for me to drive because he had been shot, not realising that I also had been hit."

He drove from Old Field Road to Murray, turned into CB Downes, then along the N3 highway into Alan Paton Avenue towards the city.

"I was terrified, I had been shot and my brother was lying next to me bleeding … it was terrible. I had to drive on the roadside and drove through red lights sometimes and the traffic was hectic, but I didn't stop until I got to the Medi-Clinic hospital."

Pieter was treated at the hospital and later released but his brother is in a critical condition. Pieter said another bullet hit the back of his bakkie.

He said he was baffled by the motive for the attack, but he has no doubt that the attackers wanted them dead.

"It doesn't add up for me, I don't know what this world is turning into. You can't even go to work anymore."

Police spokesperson Inspector Joey Jeevan said the motive is unknown. She said the attackers were driving a Toyota Cressida. Three expended 9mm cartridges were found on the scene.