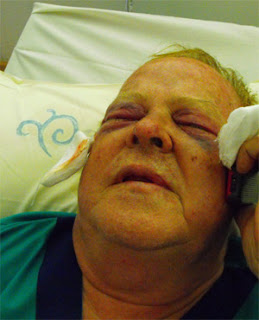 Vereeniging - An eye surgeon who for 21 years was president of the International Intraocular Society, might never be able to see normally again after a brutal attack.

Marius Pretorius, 70, and his wife Lien, 68, were overpowered in their Vereeniging flat last week by three men armed with guns and knives.

They tied up both victims with rope and ties, before trying to strangle Mrs Pretorius.

The couple's daughter, Hannelie Warren, said on Monday they also tried to gouge out her dad's eyes. The robbers apparently said they didn’t want him to see again and identify them to the police.

"One attacker sat on my dad's back and smoked a cigarette while he was tied down. My dad has horrific injuries - he may never have normal vision again."

Warren said Pretorius was still in hospital. The muscles behind his eyes were damaged and specialists aren't sure whether the muscles will recover sufficiently for him to have normal vision again.

Warren said her parents were severely traumatised and receiving counselling.

No arrests have been made and Warren accused the police of dragging their feet.

Pretorius, speaking from the Emfuleni Medi-Clinic in Vanderbijlpark, said on Monday evening that since the attack almost six days ago, police had not interviewed him about what had happened.

"They only spoke to my wife. No one has been to ask me any questions," he said.

Warren said people in the building where the attack had taken place and who saw the attackers before and after the incident had also not been approached by police in a bid to gather any evidence.

"This is appalling," she added.

Captain Shado Mashobane of the Vereeniging police station confirmed that no arrests had been made, but said the investigation was underway.

Warren said they had been flooded with e-mails and phone calls of support from ophthalmologists in the UK, US, Australia, China, Canada, Hungary and Hawaii.