'I had to at least land one blow' 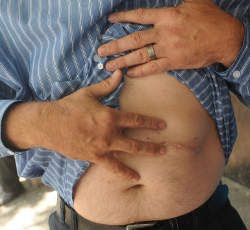 Janie Fourie shows where a bullet hit him just under the heart, with his four-digit hand. His middle finger was shot off during the attack. Photo: Etienne Creux, Pretoria News

Shot nine times by two attackers, one bullet barely missing his heart, a Pretoria father kept on fighting the men to protect his wife and two little boys.

Six of the nine bullets went right through Jannie Fourie's body. About 20 shots were fired in the passage of his family house in Pretorius Park that night.

But as Fourie realised he might die, he decided there was still enough blood left in his body to get up and make one more attempt to stop the attackers.

"I am a Christian. I believe the Lord Jesus Christ was there that night. If I had to die, I knew I'd go to heaven. These attackers are children of Satan. They were there to kill, not steal. So I attacked them, deciding that I had to at least land one blow," he told the Pretoria Regional Court.

He said while bullets flew past and through him in the narrow passage, he hit the attackers, "four to five quick shots at a time, until the one dropped".

He then tackled another.

"As I hit them, the cowards screamed like pigs. I heard their screams above the gunshots," this National Intelligence employee testified.

His wounded wife hid in a wardrobe with their eldest son, who will be three years old in a month's time.

Romeo Maota Nkwagatse, 24, and Jonas Masemola, 27, pleaded not guilty to charges of attempted murder, robbery with aggravating circumstances, pointing of a firearm and the unlawful possession of firearms and ammunition.

Fourie testified that he was awoken by his wife's screaming at about 2am on April 15, 2008.

His wife, Bernice, was in the eldest boy's room. Fourie saw two men trying to push the bedroom door open, while his wife was struggling to close it.

"They shot my wife through the door. I ran to the first, shorter figure, hitting him several times. As he went down, I turned to the other guy," Fourie recalled.

He said one man had a semi-automatic pistol and the other a revolver.

"They fired at me. I could feel when they shot my finger off. I chased the one as he ran down the passage in the direction of our one-year-old baby's room. I felt something was wrong with my knee, but I got hold of the man and hit him, while he was shooting at me," Fourie said.

However, because of severe blood loss and the shot to the knee, he fell at the baby's doorway. The baby was sitting upright in the bed, screaming. The attacker stood between Fourie's legs, shooting him just underneath the heart.

"The man returned to the room where my wife was. I knew I still had some blood in me, and I was willing to give it all for my family. I got up and chased him again. The coward ran out," Fourie said.

Realising both attackers were gone, he collapsed on the floor.

The attackers only took Fourie's cellphone and wallet with R90 in it.

He spent two weeks in ICU. As soon as the tubes were removed, Fourie went home on crutches, saying his boys were having nightmares and he had to be home.

"I prayed for my family, for healing and forgiveness. I made peace, knowing that the Lord is the final judge. The attackers will be punished, and I am alive to testify about the miracle of our survival," he told the court.

Bernice said she went to her eldest son's room that night when he called her. She heard a noise and went to the door and saw two men in the light from the room. Nkwagatse was one of them, she said.

"I screamed and tried to close the door with all my might. They pushed back. The next moment I felt a burning sensation in my arm where they shot me," Bernice said.

She grabbed her crying son and hid in the wardrobe.

"My family was being killed and I couldn't help as I was holding my one son. I prayed," she said.

When all grew quiet, she heard Fourie asking if she was okay.

"The passage was covered in blood, it looked like a butchery. Blood was pumping out of Jannie. I was terrified," she said.

The trial continues in February next year.

This article was originally published on page 1 of Pretoria News on December 01, 2009