Woman, 83, tortured for nothing 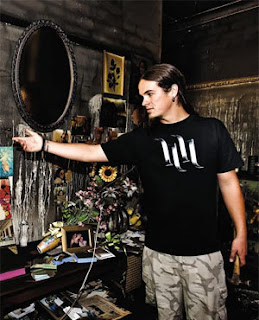 Pretoria - An elderly woman from Lyttleton, Pretoria, has been overpowered, tied up, strangled and beaten to death in her house, after which the attackers set fire to it - for nothing.

The hands of eighty-three-year-old Kitty Botha - or tannie Kitty as she's known - were tied up, and a rag stuffed in her mouth.

Her grandson, Ryan Botha, 26, said according to the autopsy report, his grandmother died of head wounds.

"There were also marks on her face. Her body was found in her house in Selborne Avenue, in the hallway, in front of the room where the fire was started. She was partially burnt."

Tannie Kitty's Dachshund, Moomoo, presumably went to hide behind the couch during the attack on Friday night, where he smothered to death due to the smoke.

"This is the third time that there's been a break-in at my ouma's house, but the first time that she was attacked."

Botha, who'd been visiting his grandmother a few hours before the murder, said the attackers probably struck between 19:00 and 21:30, since she spoke to her daughter, Elna Botha, on the phone just before 19:00.

Tried to get gran's guns

The attackers ransacked the entire house.

"The content of every drawer and cupboard was thrown out.

"They also tried to open the safe which contained my ouma's firearms, but failed. Then they started the fire in the room next to my ouma's bedroom and fled."

According to him, nothing was stolen.

Botha said that the neighbours heard a loud noise when a window burst due to the heat. They went to the house to investigate.

"The neighbours tried to put the fire out with their garden hoses. A policeman who happened to drive by the house tried to go inside to look for my ouma, but the flames and smoke were too overwhelming."

The fire brigade arrived shortly thereafter and was able to put the fire out before it spread throughout the entire house.

'Nothing but love to give'

Botha said his grandmother was probably one of the oldest residents in Lyttleton.

"She lived in that house for 55 years. The greatest part of the last 27 years, after the death of my oupa (Johan Botha), she lived alone.

"My ouma was an amazing woman. She was very religious and had nothing but love to give."

Bible verses and messages of love and peace, dotted on the walls throughout the house, testify of tannie Kitty's faith.

"She was a strong person, but didn't stand for any nonsense, and I believe she gave her attackers a stern talking-to. I hope they read the messages on the wall and that it bothers them so they may repent."

Botha says he isn't bitter about what happened. "If I didn't know the Lord, I would have held a grudge."

Lynette Erasmus, police spokesperson, said the police have not been able to find any sign of a break-in.

Police are investigating a charge of murder and arson.