Farmers plead to Zuma for help 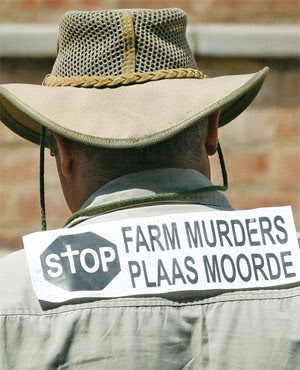 LOUD AND CLEAR: Stop farm murders. Several farmers who attended a memorial service at Fort Schanskop in Pretoria for the victims of farm attacks wore this sticker. (Lisa Hnatowicz, Beeld)

Pretoria - A group of farmers in Pretoria on Saturday demanded that government help "stop farm murders" and pleaded their case in an open letter to President Jacob Zuma.

"Surely, if politicians and senior officials can publicly direct police officials to use firearms to prevent crime or becoming the victims...the very same principle should apply to law-abiding citizens who do not enjoy the luxury of police protection," said Transvaal Landbou Unie SA (TLU SA) chief executive Bennie Van Zyl.

He accused the police of being corrupt and said government failed in its responsibility to protect its citizens.

The group was calling for a formal summit with government to renew safety initiatives that former president Nelson Mandela implemented during his term.

Van Zyl and several others spoke at a ceremony held in memory of farmers who were murdered.

In the open letter to Zuma, Van Zyl spoke about "the threat against farmers, their families and their employees".

"The producers of food and fibre are threatened by vicious criminals responsible for committing the most hideous crimes against mankind displaying no respect for age or gender," he said.

Johan van Biljon, chairperson of the organisation's youth divison said since 2006 there had been a systematic increase in farm murders.

About 50 people attended the ceremony - most of them bearded men wearing shorts and khaki shirts.

While wiping away tears, the group laid calla lilies at empty coffins and on a white cross in commemoration.

"They say we [are] ready for the [Fifa] World Cup, but in the rural areas it's a different story," said Van Biljon, expressing concern about rural safety.

"The unabated continuance of the most brutal violence against the producers of food and fibre, their families and their employees is not only targeting a specific sector of the economy in a manner to which none other can compare," he said.

The youth division were expected to hand over the statement to police representatives as they did not attend the ceremony to receive it.