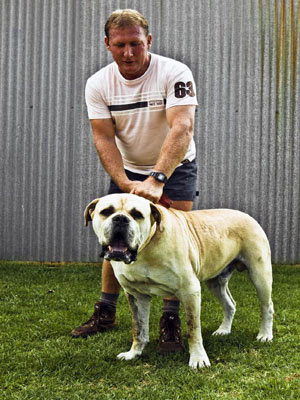 Kobus Erasmus with his dog, Rufus, who grabbed a suspected robber during a shooting incident at his farm near Moloto, north of Pretoria. (Jaco Marais, Beeld)

Pretoria - A gang of armed robbers "surrounded" two houses on the farm Jakkalsdans, near Moloto, on Saturday night and fired a number of shots at the owners, in what sounded like a "little war".

Kobus Erasmus, 40, said he and his son, Corrie, 18, had to run from the bullets which were shot at them from all directions.

The father and son went outside to investigate when their dogs started barking at about 21:30.

"Corrie first looked through the window and said there are people in our yard. At first I thought it was one of our workers and we went to investigate," said Erasmus.

At that moment, Kobus's father, Lukas Erasmus, 64, also came out of his house to see why the dogs were barking. The two houses are a stone's throw from each other.

"Just as I saw my son coming around the corner of the garage, my dog, Rufus, grabbed a suspect. The next thing I knew, another suspect started shooting at us. He was about 5m from us," said Kobus.

"Suddenly there were more than four people shooting at us. I yelled at my father to run back to his house. 'Grab your guns and shoot!' I yelled. Actually we don't own a single firearm. I just hoped it might frighten them off if they think we're going to start shooting back," said Kobus.

While he and Corrie ran home, the rain of bullets continued.

Meanwhile, Kobus's wife, Tessa, 46, had grabbed their other two children, aged 17 and 10, and run to the main bedroom. They lay down on the floor next to the bed.

Kobus's father and stepmother, Marie, also lay down on the floor of their house after switching off all the lights.

"Corrie and I ran into the house, switched off the lights, drew the curtains and lay down on the floor. We lay there for a while until it was absolutely quiet," said Kobus.

He said it's a miracle that nobody was shot. One of the bullets hit his bakkie's mud flap.