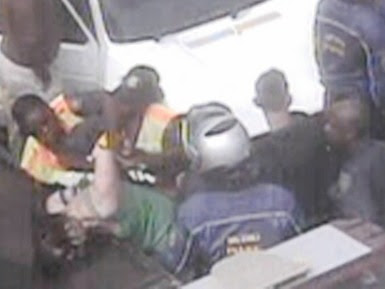 Abuse of power by the police and traffic authorities has come under the spotlight following the broadcast of film footage showing Tshwane Metro police members manhandling a woman, handcuffing and arresting her for a parking violation.

The incident, which happened at the end of November last year, was captured by one of the Tshwane municipality's security cameras.

The footage - broadcast by Carte Blanche on Sunday night and soon to be made available on YouTube - shows the brutal treatment of 24-year-old Magdel Steyn who was jailed overnight for double parking.

The video material was made public by AfriForum as part of its "Police Abuse of Power Barometer" project.

On the day of the incident Magdel and her mother Annemarie Steyn had driven from Germiston to Pretoria for business. Magdel had dropped her mother off at the Registrar of Companies at the corner of Meintjies and Esselen Streets in Sunnyside and went to park nearby, joining a line of cars that were double-parked.

A metro official in a marked vehicle hooted at her, prompting her to move forward. He hooted again and so she drove around the block and parked on the opposite side of the intersection on the curb when he confronted her angrily as she sat in her car.

"Immediately he was very aggressive. He just told me: 'What's your problem, why can't you move?' I tried to explain she'll be back within five minutes. After telling him the story I closed my window and he started banging with his fist against the window. And I actually started getting scared because he was really using quite a bit of force," said Steyn.

She tried to move her car again, but a group of Metro officers swooped on her, just as her mother arrived back at the car.

About 11 traffic officials were shown to take control of the situation as Steyn was grabbed by a female Metro officer who threw her against the roof of a Metro tow truck. She was told that her car was to be impounded.

Annemarie Steyn, who kept pleading for an explanation for what wrong had been done, was prevented from helping her daughter who was pushed around and roughly cuffed with her hands behind her back.

Metro police spokesman Console Tleane said Magdel had failed to heed verbal warnings that she was obstructing traffic and therefore endangering the lives of other road users. The circumstances had come about because she had been unco-operative, prompting the Metro official to call for back-up.

Magdel spent the night at the Sunnyside police cells, while her frantic mother was told she would be charged with attempted murder. However, the next morning Magdel was charged in court with reckless and negligent driving and ordered to pay an admission of guilt fine of R1 500 to go free. She did this and now has a criminal record.

The Steyn family has laid criminal charges against the Tshwane Metro police for Magdel's injuries and suffering as well as thousands of rands stolen from her impounded car, and damage caused to the interior because the windows were left open during a rain storm.

Tleane said the entire matter was under investigation, and no action has been taken against anyone.

Nantes Kelder, AfriForum's head of community safety, called for condemnation of the incident.

"AfriForum has already discussed the matter with Francois Beukman, the Executive Director of the Independent Complaints Directorate (ICD).

"The incident is regarded in a serious light and the ICD will investigate it further," Kelder said yesterday.

AfriForum has demanded action to be taken against the Metro police members shown abusing their power, asking for them to be suspended or withdrawn from active duty. Should this not happen soon, Afriforum plans to apply for a court order to enforce their demands.

Kelder said people can report incidents of power abuse by police members at www.afriforum.co.za and they will be assisted with free legal advice.

This article was originally published on page 2 of Pretoria News on March 16, 2010