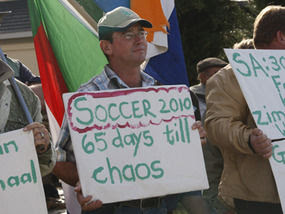 A VILE Facebook campaign to incite race hate ahead of the World Cup in South Africa in June is being investigated by police.

The official probe was launched into a group set up by alleged supporters of firebrand politician Julius Malema.

One entry, emailed to football fans around the world, calls for the “rape and slaughter” of whites and the murder of President Jacob Zuma.

In a chilling message a Malema “fan” called Thato Mbateti Mbateti warns: “Every trespasser, namely white whores, we will rape them and kill them… White kids will be burned.”

The campaign comes amid growing tensions in South Africa after the murder of white supremacist Eugene Terreblanche.

Yesterday angry crowds clashed outside a court in Ventersdorp, near Johannesburg, as two black farm workers, aged 15 and 21, appeared accused of killing the 69-year-old who had campaigned for all-white states within South Africa.

Bitter memories of the apartheid era were evoked when 2,000 people gathered and police used razor wire to separate the factions. The case was adjourned until next week.

South African leaders, including President Zuma, have called for calm after the killing of Terreblanche. But right-wing fanatics have vowed vengeance.

Malema, who leads the youth wing of Zuma’s African National Congress party, was reportedly under police guard after alleged death threats against him. The Facebook page, which attracted more than 15,000 followers, has been shut down. Malema and the ANCYL insisted it was not an official supporters’ page.

Lawrence Schlemmer, vice president of the South African Institute of Race Relations, said: “There is no reason why these things, as tragic as they are, should affect the safety of fans or players at the World Cup. The World Cup and sport, as it is supposed to, channels passions and reconciles conflict.”

The article has appeared on Express.co.uk but they have deleted it so the article is now available only on Google Cache and in the following screenshot.

UPDATE: Express.co.uk probably realised it was lame to remove their article so they have added it back again. Here’s the source link. 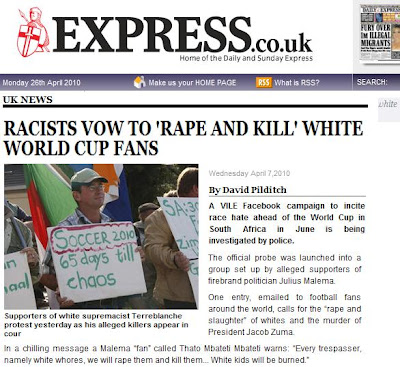