Is Genocide Coming to South Africa? 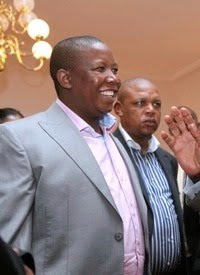 Back in the 1980s, South Africa figured prominently on the West’s radar screen. Protests against apartheid were everywhere; the movement even inspired a song: “Sun City.” With the fall of the apartheid regime in 1994, however, people lost interest in the faraway land.

But with the murder of Eugene Terreblanche, leader of the neo-Nazi Afrikaner Resistance Movement (AWB), South Africa is, albeit briefly, back in the news. What the media isn’t reporting, though, is that the killing of Terreblanche has little to do with his unpalatable political views, but is part of a wider pattern of targeting whites — virtually none of whom are supremacists. In fact, thousands of white farmers have already been murdered.

While racial strife in South Africa isn’t surprising, the current level of violence is no accident, but the work of a demagogue. His name is Julius Malema.

Leader of the ruling African National Congress’ (ANC’s) Youth Movement, Malema is a black supremacist who aims to follow in the footsteps of Zimbabwean president Robert Mugabe, who has long been persecuting white farmers in his nation. David Smith at The Guardian reports on the story, presenting a glimpse of a dystopian South African future:

This is the nightmare future that haunts many South Africans, black and white. They regard Malema as a clown, a loudmouth and a bully. But they increasingly fear that he really could follow Nelson Mandela in going from the African National Congress youth league to president of the republic.

Unfortunately, Malema Version 2010 is no better. He has continued to agitate the masses by singing a song containing the words “kill the Boer” (“Boer” is a Dutch word meaning “farmer,” but it has become a derogatory term for any white South African), even after the nation’s courts ruled it hate speech and the ANC, finally, asked its members to stop singing it.

As for the ANC government, its response has been an attempt to cover the problem up. It no longer records the races of those who commit murder and their victims, as this had shown that the latter group included a percentage of white South Africans disproportionate enough to attract the attention of GenocideWatch.org. The media also is complicit in the cover-up, as black-on-white crime is just too politically incorrect to touch. Yet there’s no fooling those on the ground. As Pamela Geller at American Thinker writes:

Whites in South Africa are keenly aware of the plans to kill them. They expect mass killings to begin very soon after the death of Mandela, but to tell this to the world is a waste of energy. More than three thousand white farmers have already been murdered, and Genocide Watch lists the Boer farmers in South Africa as victims of genocide — but the media couldn't care less. Malema has praised Zimbabwe's murderous seizure of white-owned farms as "courageous and militant." White South Africans know what's coming.

And if it comes, the media — which seem to have forgotten one of their favorite terms, “hate crime” — will have blood on their hands. As Geller also points out, “The mainstream media portrays all white South Africans as racist monsters like Eugene Terreblanche. This is simply not true. And remember: A key step on the road to genocide is to dehumanize the intended victims.”

Yet, should Malema’s dark vision become reality, whites won’t be the only victims. When racial hatred drove Mugabe to seize farms from whites — the only ones with experience running them — the unsurprising result was starvation, as Zimbabwe was transformed from breadbasket to economic basket case. And if Malema replicates Daddy Mugabe’s deadly mix of bigotry and neo-bolshevism, South Africa will descend into the same morass. Food may be scarce and foreign investment even more so. It’s what’s known as “Cutting off your nose to spite your face.”

This isn’t lost on educated black South Africans, one of whom David Smith quotes as saying, "Malema for president? Never. I will personally kill him before that happens."

That’s certainly easier said than done. What may be more likely, sadly, is that Malema will kill his nation.

(To watch a Sky News video about the South African genocide, click here.)