And so the madness of South Africa continues.

Amidst all the flag waving, salutes, uniforms and bravado, Eugene Terre’Blanche was buried on his farm in a brick and concrete tomb designed to be vandalism resistant — but as the Sun newspaper so vividly revealed, even this tomb was built by black labourers. 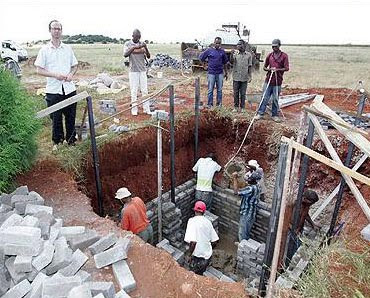 Once again, the utter hypocrisy of Apartheid and white supremacism is exposed in a publicly humiliating way.

I can only shake my head. Don’t the Afrikaners get it?

How can any white people expect to survive in a land where they are the tiny minority and use black people as virtual slave labour (Terre’Blanche paid his farm workers R300 — US $41 or £26 — per month) to do everything?

Terre’Blanche was killed in his bed. I wrote in my book, The Lie of Apartheid, that the definition of a white South African is “someone who would rather be murdered in his bed than make it.”

Afrikaners: The time for white supremacism is gone. You cannot hope to survive while you are so intrinsically entwined with black labour.

You used them for everything, even to murdering you and then digging your grave.

You cannot survive while every single thing you do, every enterprise, every interaction, every aspect of your lives, is determined by your reliance on black labour.

Because, whether you like it or not, black people also have rights, and they have claimed them.

You cannot think that you have a right to rule over black people — you do not.

I’ll say this again, maybe for the last time ever — if Afrikaners are going to survive, they must do two things:

1. Rid themselves of their reliance on black labour;

2. Congregate in an area where they are the majority, and where they do all the work: from road sweeping, rubbish collection and grave digging, to computer engineering and medicine.

They must do this now; before it is too late.

Stop all this stupid posturing, gun waving and empty threats. Everyone knows that it is meaningless.

If they don’t do that, they are all going to end up like Eugene Terre’Blanche. The only difference might be that the last few will not have their graves built by black labourers.

And if one more person tells me it can’t be done, well then, accept the inevitable.