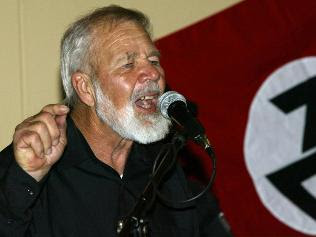 We all know that racists - especially South African ones - are white. We also know that ending apartheid in South Africa in 1994 was a happy-ever-after story.

Now welcome to the brutal truth.

South Africa is sliding back into a new racial divide, perhaps even a new apartheid. And this time most of the racists and thugs are black.

What's more, it is also sliding into an anarchy so terrible that already almost 20,000 South Africans are murdered each year - a killing rate three times higher, pro rata, than Iraq's.

Have your say at Andrew's blog

Eugene Terre'Blanche became one of them two weeks ago, and for once this murder made our news, since he was the South African racist from central casting, leading the Afrikaner Resistance Movement and being farewelled with Nazi salutes.

Police even said he'd been killed by black workers he hadn't paid. Bastard.

This week that story changed. Now it was leaked that he'd been killed while apparently trying to sodomise a boy.

This seemed an attempt to discredit anyone who'd point to his death as a sign of something more troubling than the deserved death of a creep.

Yet it's significant that just two days before Terre'Blanche's killing, the leader of the ruling African National Congress's youth wing, Julius Malema, performed at a rally the infamous apartheid anthem Shoot the Boer.

"Kill the Boer, kill the farmer," he cried, along with many hundreds of supporters. "Shoot to kill."

Malema is the protege of President Jacob Zuma, but his six million members give him a power base of his own.

This seems to have allowed this badly educated 28-year-old, who says he hates "whiteness", to get his hands on a lot of wealth, including two houses, cars and a Breitling watch.

And last week he visited bankrupted Zimbabwe, which he loudly praised for having seized white farms and reached for foreign-owned mines.

"In South Africa, we are just starting. Here you are already very far."

All this might be dismissed as the ravings of a pet fool, and, indeed, Zuma this week told him to shut up. He was scaring investors and panicking the country's five million whites, who not only grow most of the country's food, but pay most of the taxes that keep 13 million workless blacks going.

But the respected South African Institute for Race Relations, which fought apartheid, this week warned of worse than Malema.

Racial tensions were fast worsening, it said, "chiefly as a result of incitement by the (ANC) to 'shoot and kill' the Afrikaner ethnic minority". This seemed to be a deliberate tactic, it suggested. The ANC had largely failed to ease black poverty, while its leaders used their power to get rich themselves.

Violent protests against the ANC by poor blacks were now "commonplace", and "in order to shore up support in the black community, the ANC increasingly appears to be seeking to shift the blame for its delivery failures on to the small white ethnic minority ... "

Stoking racism to keep power can be a murderous game, one which may soon play out catastrophically in the land of Nelson Mandela.

Already many whites are leaving, especially Jews. They've seen this kind of thing before.