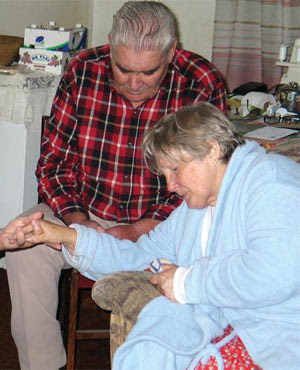 Jannie and Marie Strydom comfort each other after their last surviving child was shot dead in front of them. (Arisja Jacobs, Beeld)

Johannesburg - An elderly couple lost their third and last surviving child after he was murdered next to their double bed.

Pastor Hennie Oosthuyse comforted Jannie and Marie Strydom by saying that Paul Strydom, 52, had loved his parents so much that he gave his life to protect his mother.

The couple's eldest child, Chris, died in a motorbike accident at the age of 20 in 1976 and their youngest son, Johan, 46, died four years ago when he committed suicide.

Paulla, as everyone in the town called the Strydoms' son, was a bachelor and lived with his parents in a humble house in München Street.

His father woke up with a fright at 02:00 when the light in the main bedroom was switched on.

'I was sure he wanted to rape me'

"Four young armed men stormed into the room. They forced me onto my stomach and tried to tie my hands behind my back," he said.

A robber went to fetch Paulla in his room and forced him into his parents' bedroom where he was ordered to lie down on the ground next to the bed, on the side where his mother was still lying.

"They then screamed: 'Where are your daughters?'" a deeply shocked Marie told on Thursday.

"When I told them that we only had Paulla, one of them grabbed me by the ankle and tried to pull me from the bed. I was sure he wanted to rape me."

Paulla lifted his body to try to help his mother but was shot in the chest.

His parents said the bullet hit his heart.

"He just sighed and died," his crying father told.

The murderers presumably got a fright and took only Marie's cellphone before fleeing.

"Oh, I don't know…I just don't know," she muttered on Thursday morning. "If they wanted money I would've given it to them.

"Paulla loved us so much. He regularly brought me little gifts. Just the other day, he brought me this rag doll," she said while holding the soft toy.

"How do you survive something like this? It is my third and last child that has now died."

A few of Paulla's friends who arrived at the house on Thursday said they would remember this boilermaker from the Harmony mine for his kind-heartedness.